10 Corporations Control Almost Everything You Buy — This Chart Shows How

Ten mega corporations control the output of almost everything you buy; from household products to pet food to jeans. 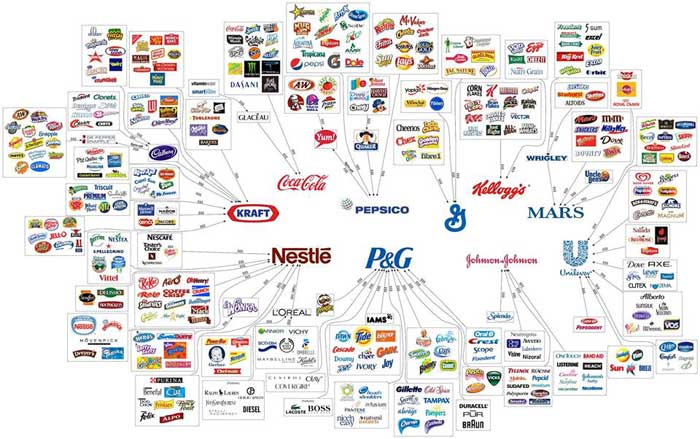 According to this chart via Reddit, called “The Illusion of Choice,” these corporations create a chain that begins at one of 10 super companies. You’ve heard of the biggest names, but it’s amazing to see what these giants own or influence.

(Note: The chart shows a mix of networks. Parent companies may own, own shares of, or may simply partner with their branch networks. For example, Coca-Cola does not own Monster, but distributes the energy drink. Another note: We are not sure how up-to-date the chart is. For example, it has not been updated to reflect P&G’s sale of Pringles to Kellogg’s in February.)

Here are just a few examples: Yum Brands owns KFC and Taco Bell. The company was a spin-off of Pepsi. All Yum Brands restaurants sell only Pepsi products because of a lifetime deal with the soda-maker.

$84 billion-company Proctor & Gamble — the largest advertiser in the U.S. — is paired with a number of diverse brands that produce everything from medicine to toothpaste to high-end fashion. All tallied, P&G reportedly serves a whopping 4.8 billion people around the world through this network.

$200 billion-corporation Nestle — famous for chocolate, but which is the biggest food company in the world — owns nearly 8,000 different brands worldwide, and takes stake in or is partnered with a swath of others. Included in this network is shampoo company L’Oreal, baby food giant Gerber, clothing brand Diesel, and pet food makers Purina and Friskies.

Unilever, of soap fame, reportedly serves 2 billion people around the world, controlling a network that produces everything from Q-tips to Skippy peanut butter.

And it’s not just the products you buy and consume, either. In recent decades, the very news and information that you get has bundled together: 90% of the media is now controlled by just six companies, down from 50 in 1983, according to a Frugal Dad infographic from last year. 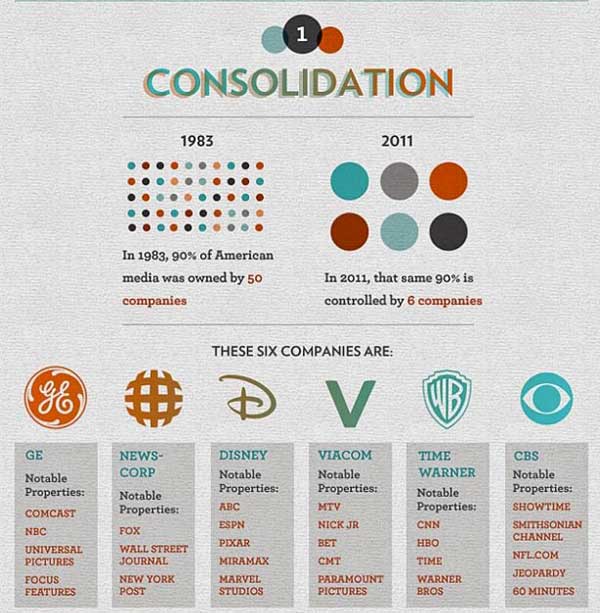 It gets even more macro, too: 37 banks have merged to become just four — JPMorgan Chase, Bank of America, Wells Fargo and CitiGroup in a little over two decades, according to this Federal Reserve map.

The numbers are stark, and the charts visualize the mind-bending reality. This is the world we live in. 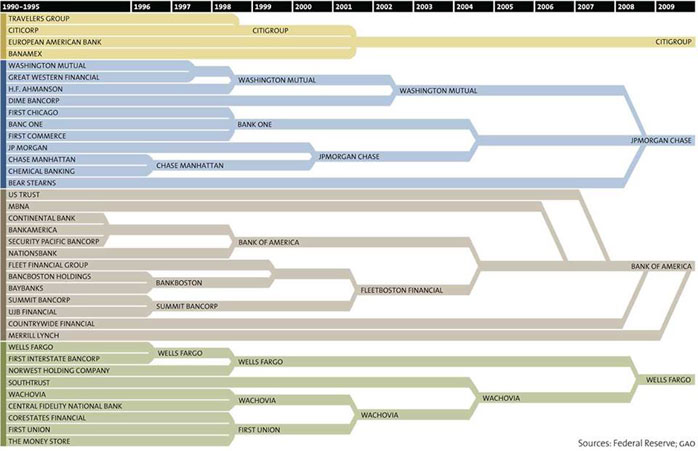 By Chris Miles to policymic.com