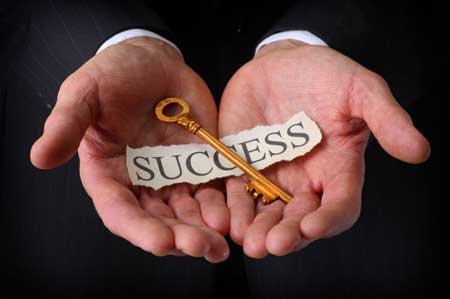 Everyone has dreams but not everyone possesses the power, knowledge and ability to make their dreams a reality. All successful people possess certain truths and habits, principles that make them the success that they are. I have carried out an intense research on habits of successful men and women. In this article, I have compiled below a comprehensive list of the top 10 things successful people do to reach their dreams. Come with me on a journey as we learn from these great men.

It is one thing to set a goal and it’s another thing to achieve that goal. Almost everyone sets goals but only a few possess the guts and discipline to follow through on those goals. At the beginning of every year, we all make resolutions about things we want to start or stop doing. If you look back to the first day of this year, can you proudly say that you have achieved 40% of your goals? Anthony Robbins is a very good example of someone who knows how to follow through on his goals. This amazing guy went from earning $38,000 to $1 Million in just one year. The great oil billionaire H.L. Hunt once said that there are only two real requirements for success: first, he said, is to decide exactly what is it you want, second is to determine the price you are going to have to pay and resolve to pay that price. Obey this rule and you will be successful; ignore it and you will remain a local champion.

Malcolm Gladwell popularized the idea that 10,000 hours of guided practice is the key to success. While some scientists may not totally agree with that principle, I believe that there is more truth in it than lies. For you to become truly excellent at whatever it is you do, you need to be consistent at it. Cherish every opportunity you have to do what you love and do it well. All successful people know this secret.

3. They make the best of every situation.

Horatio G. Spafford had just lost his son to scarlet fever and his lifetime investments were lost in the Great Chicago Fire of 1871. On a trip to Europe in 1873, his wife and four daughters were involved in a tragic ship wreck which claimed the life of his four daughters. After the incident, Horatio’s wife, Anna sent him a telegram to inform him of the accident. On receiving Anna’s telegram, Horatio immediately left Chicago to bring his wife home. Sailing across the Atlantic Ocean the captain of the ship called Horatio to the bridge. He informed Horatio that they were now passing the spot where his daughters drowned. That night, alone in his cabin, Horatio Spafford wrote one of the greatest hymns of all time “It is well with my soul”. He turned adversity into advantage and for that reason; he became one of the few men of his time that are still remembered today. If you are going to become successful, you must be ready and able to make the best of every situation because tough times will definitely come.

4. They take responsibility for their lives.

Nothing ever happens to us by chance. Our life today is a reflection of our past decisions and the choices we make today will shape our future. In the movie “The Pursuit of Happyness” (2006), the story of Chris Gardner was told. Christopher Paul Gardner’s childhood was marked by poverty, violence, alcoholism, sexual abuse, and family illiteracy. He didn’t even know his father and he was taken away from his mother at a very tender age, as he lived in foster homes for a large part of his childhood. He is now a CEO, investor, motivational speaker, author, and philanthropist. In fact, his book spent over twenty weeks on the New York Times best seller list and has been translated into more than forty languages. You can see that despite his unfortunate childhood, he didn’t accept the fate he was handed. He took responsibility for his life and he resolved to make a difference. He used what he had to get what he wanted.

Behind every successful Steve Jobs is a Steve Wozniak and there is a Paul Allen behind every successful Bill Gates. You need to have people that will help you achieve your dreams; believe me, you can’t do it alone. You need mentors, partners, employees, spouse and so on. Some of the criteria for finding good partners and mentors are compatibility, experience, similar values, loyalty, and mutual benefit among many others.

A man was born in 1918; he disappeared from view in 1964 after giving a four-hour speech at his trial where he was convicted and received a life sentence. He spent 27 years in prison because he wouldn’t compromise his political beliefs. Released in 1990, he won a Nobel Peace Prize in 1993, became the president of South Africa in 1994, and has since then received more than 250 other honors. As you have probably guessed, his name is Nelson Mandela. He made a huge sacrifice for his nation and he finally got what he had dreamt about for over three decades.

Let me tell you another story. In order to generate $1,350 in capital they used to start Apple, Steve Jobs sold his Volkswagen microbus and Steve Wozniak sold his Hewlett-Packard calculator. They each made what was then a big sacrifice but it was really a small price to pay considering the fact that Apple is currently worth over $80 Billion. You need to make your own sacrifices now so that people can tell your story in the years to come.

Real estate mogul Donald Trump is currently worth over $2.7 Billion, not bad considering the fact that he was previously indebted to the tune of $900 Million. The world didn’t end for him when he lost all he had and was bankrupt. He actually borrowed more money and kept trying until he made it.

Thomas Edison tried over 10,000 times to make a light bulb before he succeeded. We would probably still be in darkness now had he given up. The toughest card life deals you and me is the test of time. Only those with resilience and the willingness to persevere will pass this test.

Every successful man or woman is a risk taker. When we were children, the society and the people closest to us shaped our lives. For instance, your parents probably told you to go to school, finish with good grades and get a good job. Everything our society preaches to us is get security and this is why whenever you want to take any big decision in life or do something out of the ordinary, you get scared. The difference between a success and a failure is that a failure runs away from his fears while successful people run towards their fears. “Do one thing every day that scares you,” said Eleanor Roosevelt. If you don’t take that advice, you are never going to grow and you can as well forget about becoming successful.

9. They cherish hard work and discipline.

Brian Tracy defined self discipline as the ability to make yourself do what you should do when you should do it whether you feel like it or not. I write everyday not because writing is so interesting but because I have to do it if I’m going to succeed as a writer. You need to really develop this habit because there is no other way to become successful. Rose Blumkin founded Nebraska Furniture Mart which is now owned by Warren Buffet. She worked every day at her store till the age of 103; she got ‘work sick’ the only time she took a vacation for about a week. She knew the value of hard work. To become successful in life, you need to find what you love doing and do it with all your heart. “With faith, discipline and selfless devotion is nothing worthwhile that you cannot achieve,” said Muhammad Ali.

Value attracts wealth and attention. Becoming successful can be simply defined as solving a problem. Find a problem that your skills, passion, dreams and potential are programmed to solve and solve that problem. Increasing demand for pizza better and faster access to pizza gave birth to pizza delivery. Business men and women needed faster means of transport to business meetings all around the world and boom, the private jet was made. You have been made to solve a particular problem, solve that problem and success will be yours.

All the points mentioned above are just principles and will not make you successful until you decide to make them habits. Make a decision to succeed today and nothing can stop you.

Be the next successful person and add your must-do item in the list too!