KIC 8462852 is the star everyone is talking about since no one can explain the irregular patterns of light coming from the star located 1,500 light years away from Earth. Many researchers have speculated what could cause the enigmatic dips of light that are unlike anything seen before.

Interestingly, during an interview, Dr. Michio Kaku said that we could be looking at an alien megastructure build around the star.

A star designated as KIC 8462852 has created great confusion among researchers around the globe. The mystery dimming of star KIC 8462852 has fueled intensive research as dozens of scientists have desperately tried explaining what causes the mysterious light fluctuations of the star.

Many people have agreed that a giant Alien Megastructure created by a highly sophisticated Alien civilization could be one of the explanations. So far, researchers have proposed a number of explanations, but none of them seem to satisfy the mystery behind the star. Even today, Astronomers still cannot rule out the presence of mysterious ‘alien megastructures’ around Kepler Star KIC 8462852 —located approximately in the constellation Cygnus.

And while scientists are debating whether we are looking at giant comet swarms, alien megastructures or mere data processing errors, Theoretical Physicist Michio Kaku believes that the potential megastructure around the mystery star could be “the biggest story in the past five-hundred years!”

According to Dr. Kaku, “this star is breaking all the rules” and “we would have to rewrite astronomy textbooks” to think anything different.

“Basically, if a planet eclipses a Mother Star, goes in front of the Mother Star, Starlight drops maybe one percent at maximum–however starlight has been dropping at twenty-two percent,” Dr. Kaku explained in an interview.

“There is a colossal, humongous, object of some sort blocking the starlight from this star. We’ve ruled out all of the usual suspects; rouge planets, comets, asteroids and the only thing left is an ‘alien superstructure’ of some type.”

“We’re talking about what’s called a Type Two Civilization that could build a gigantic [Dyson Sphere] sphere possibly bigger than Jupiter to absorb starlight,  to produce energy and is right out of science fiction,” added Dr. Kaku. 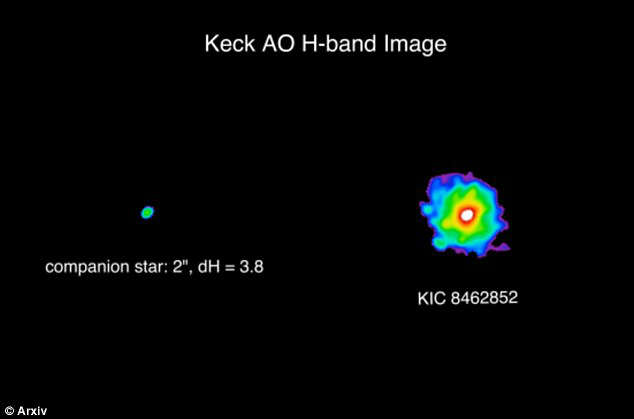 KIC 8462852, located 1480 light-years away, and has produced a series of bizarre light fluctuations researchers have not been able to conclusively explain.

So far scientists continue monitoring the mystery star which displays hundreds of anomalous dips in the star’s light. Mysteriously, these dips do not appear to be parodic at all and have strange shapes as well. Researchers agree that it’s nearly impossible that the strange dips in the Stars luminosity are caused by planets since it would cause a dip pattern which repeats itself regularly, something that is not happening at KIC 8462852.

Researchers believe that two to three years of continuous observations using the Las Cumbres Observatory Global Telescope Network (LCOGT), could most likely enable the team to spectroscopically identify material around KIC 8462852, and solve one of the biggest astronomical mysteries of the 21st century.

Media interest in the mystery star went viral when a group of astronomers from Pennsylvania State University published a study that stated KIC 8462852’s “bizarre light curve” was  “consistent with” a swarm of alien-constructed megastructures.