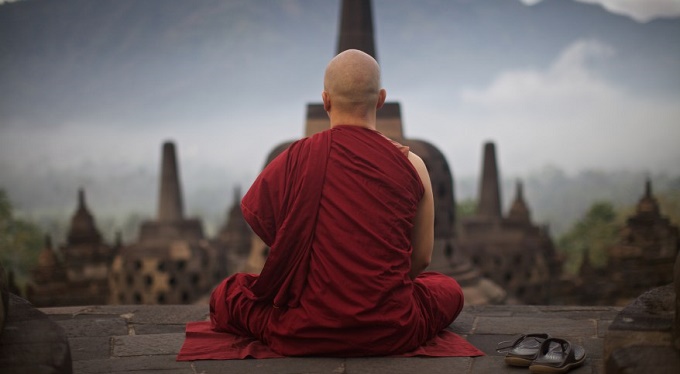 Everybody gets angry. Whether it’s mild irritation or flaming rage, we experience it every day and there are few of us for whom this is not, at some point, a serious problem. By “problem” I mean “soul sucking, productivity leaching, blood pressure soaring, jaw clenching, dark aftermath generating” state. This is what, in more genteel Buddhist parlance, is called an “afflictive emotion”, or in other words, a mental state that causes suffering.

Eliminating suffering is the raison d’etre of Buddhism. In the Buddha’s own words: “Both formerly and now I teach only one thing: the nature of suffering and it’s ending.” And anger does cause suffering. You might at this point object that we need anger. Perhaps.  Yet most of the things we think we need anger for — fighting injustice, fleeing danger, protecting ourselves — are actually better done when not angry. When we are calm, collected and ruled by love instead of anger we are actually more insightful, more effective, more vital, and more enduring in confronting problems whether public or personal. We need, then, a way to free ourselves of angry mental states when they arise. Here are five ways that the Buddha suggested we do that.

1) Consider what anger does to you.

As the Buddha pointed out, an angry person wishes that their enemy should sleep badly, suffer losses, be ugly and have people turn against them. Yet all of these things are what in fact happen to the angry person! The angry person sleeps poorly. Their work suffers. They don’t enjoy what they have. People avoid them. And there is nothing uglier to look at than an angry person. If you don’t believe that, the next time you are angry look at yourself in the mirror. (Kodhana Sutta, AN 7.60)

2) Find some good in the one you are angry at.

This takes humility. So much so that the Buddha used the metaphor of someone who is very thirsty coming across an elephant’s footprint in the jungle. Just happened to you the other day, right? Anyway, the footprint is filled with rainwater. So they get down on their hands and knees and drink the water. When we are angry the other person often looks distorted to us — ill-intentioned, stupid, willfully bad. We do not see any good in them, and this biased perception just feeds our anger. If we can humble ourselves in our righteous anger and kneel down, metaphorically, we can find the good in our “enemy”, and when we do that they will inevitably appear to us less like an enemy. Calm can be restored and healing can begin.

3) Remember something good that they did to you.

As well as not being entirely evil (chances are) this person has most likely, at some point, done you a good turn, even a small one. The truth is that considering the people we get most angry with are often those closest to us, they have probably done you more than one good turn. Remembering this has the same effect as the previous reflection — it takes the wind out of the engine of demonisation at work in your mind.

The Buddha was pretty intense on the non-anger thing. He said that even if someone were to cut you to pieces with a two-handed saw, if you got angry you wouldn’t be a true disciple of his (Kakacupama Sutta, MN 21). After setting that bar the Buddha advised that one meditate like the earth, like empty space, like a flowing river. One should visualize oneself as like the earth: no matter what people put on it or how they dig in it, it is still the earth. Likewise, one should remain oneself in the face of anger: vast and calm like the earth.

“Empty space and a flowing river” are alternative visualisations that work in the same way: space is not stained, and a river does not stop flowing or change colours. Of course, in our current time of massive pollution, “space, earth and river” may atually be overcome by what they come into contact with. Perhaps if the negativity we are exposed to seems likely to pollute us beyond our ability to cope, we should visualize ourselves like someone riding away into the sunset and gently take our leave.

This is the meditation of preventive medicine. In some streams of Buddhism it is traditional to begin and end every meditation session with something called “metta bhavana”, or “the cultivation of loving kindness”. In this meditation exercise you evoke feelings of goodwill, or love. You start with yourself, thinking, “May I be well. May I be happy. May I be at ease.” It may help to picture yourself radiantly happy and at your best. Then extend this wish out to others, starting with those you know and love and moving out in ever-widening circles to those you know less well, don’t know at all, and finally, those you dislike or are angry with. Visualize them well, happy, and at their best and think, “May they be well. May they be happy. May they be at ease.” Remember that if people you dislike, or those who have hurt you, were as well as you are currently wishing them, they would no longer be unlikeable and would be less likely to hurt you, or anyone else, again.

By practicing the cultivation of goodwill in this way you strengthen your reserves of goodness and begin the all-important work of altering your worldview, moving it into accordance with a deeper truth, one that reminds you of the latent similarities at the core of all human experience– that all beings desire joy and freedom from suffering — and this will help to clear your vision and your mind, making it less likely that anger will arise in the first place, and enabling your detachment from it when it does.

Previous articleHe gave $50 to a stranger. What he later reads on this little piece of paper… Wow.!
Next articleCure Insomnia: 7 Ways to Fall Asleep Right Away, and Wake Up Early
Digital Media