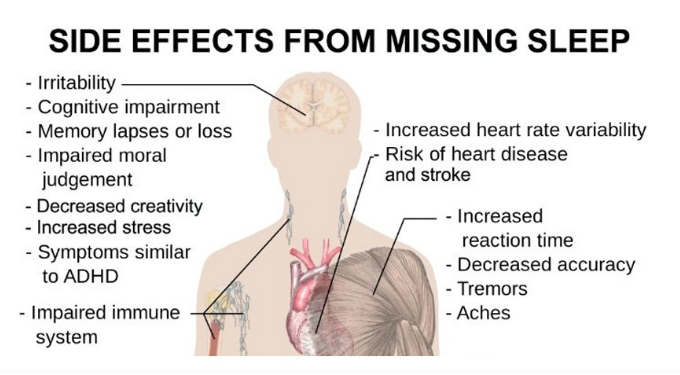 We’re committed to offering our readers the best possible information to help everyone live and enjoy a happier and healthier life. This means that we’re always searching for the next solution for any of life’s many problems and exploring it in a way that best applies to your everyday life.

Sometimes, there is content that’s perfect just the way it is. In this case, we are very lucky to be collaborating with the people behind this valuable article and have been granted permission to republish it. We encourage you to visit their website at the end of this post.

Sleep, while one of the most blissful and relaxing things we do to survive, is also one of the most essential. When we close our eyes for those few hours each night, we give our body the chance to recharge after all the stresses of the previous day. Millions of processes go on while you sleep, helping the brain to commit things to memory, while cells go to work regenerating and repairing the tissue that was damaged while we were awake.

When we don’t sleep, however, none of this gets the chance to happen. Not only will we awake feeling cranky the next day and have a difficult time concentrating, prolonged periods of sleep deprivation may have serious consequence on hour health. In fact, ample research has been conducted on exactly what happens to different parts of the body if we are not getting our eight hours each night.

What these studies have found is that lack of sleep can cause a slew of serious and life-threatening conditions, ranging from cancers to diabetes, and heart issues. So what exactly are the conditions that have been officially linked to poor sleeping habits? Click “view slideshow” to find out a few.

A 2013 study conducted by researchers at Johns Hopkins University found that a lack of sleep can both be a cause of Alzheimer’s disease and impact the speed of the disease’s progression. The study was conducted based on previous research that discovered sleep is necessary for the brain to get rid of “cerebral waste,” or the garbage-like buildup that can accumulate and cause dementia.

Conducting their study on 70 adults, ranging between the ages of 53 and 91, researchers found that those who reported getting poor sleep each night showed a greater amount of  beta-amyloid deposition in their brains on PET scans. This compound is known to be a definitive marker of Alzheimer’s disease, leading researchers to conclude that lack of sleep is preventing the brain from getting rid of this form of “cerebral waste.”

Diabetes has long been linked to poor sleep, but a recent study conducted by researchers at the University of Chicago unpacked how poor sleep can potentially cause obesity, and ultimately, lead to diabetes. Knowing that fatty acid levels within the blood can impact metabolism speed and insulin’s ability to regulate blood sugar, researchers examined the effects little sleep had on fatty acid buildup.

Examining 19 men’s sleeping patterns, researchers found that those who got only four hours of sleep over the span of three nights had high levels of fatty acid within their blood between 4 a.m. and 9 a.m. This was a 15 to 30 percent increase over those who got 8.5 hours of sleep each night. Also, researchers found that the increase in fatty acid levels caused a higher degree of insulin resistance, all signs they attribute to pre-diabetes. Those who got more sleep, however, did not present the same markers for obesity or pre-diabetes.

Cardiovascular disease has been linked to poor sleep for some time now, but a recent study presented at EuroHeartCare, the annual meeting of the European Society of Cardiology found greater evidence of a strong correlation. After following 657 Russian men between the ages of 25 and 64 for 14 years, researchers found that nearly two-thirds of those who experienced a heart attack also had a sleep disorder.

What’s more, the men that complained of sleep disorders also were found to have a 2.6 times higher risk of myocardial infraction, a heart attack that occurs when the heart muscle dies, and a 1.5 to four times greater risk of stroke.

It may be shocking, but recent research conducted in 2014  found a link between increased incidences of suicide in adults and poor sleep, regardless of past history with depression. During a 10-yearstudy conducted by researchers at the Stanford University of Medicine, 420 participants ranging in middle to late adulthood were examined. Out of this group, 20 participants found to suffer from poor sleep unfortunately committed suicide. Because of this, researchers concluded that those who were experiencing difficulties sleeping on a consistent basis were 1.4 times more likely to commit suicide.

Those who were more vulnerable to this effect of poor sleep, researchers say, were white males 85 years or older. The study ultimately attributed this increased rate of suicide due to sleep deprivation associated with health problems and stress that increases with age.

Ulcerative colitis, an inflammatory bowel disease marked by ulcers within the lining of your digestive tract, as well as Crohn’s Disease can be a product of both sleep deprivation, and excess sleep, says a 2014 study. Researchers from Massachusetts General Hospital found that the right amount of sleep is necessary to curb inflammation responses within the digestive system which often lead to the two diseases.

After studying women enrolled within the Nurses’ Health Study (NHS) I since 1976 and NHS II since 1989, researchers found that risks of ulcerative colitis increased as sleep per night decreased to six hours or less. Alternately, researchers also found that more than nine hours of sleep increased risks as well, suggesting that the threshold for stopping digestive inflammation is a very narrow window that requires just the right amount of shut-eye. Although this response was only found within adult women, the increased chances of developing ulcerative colitis when getting little sleep existed despite other factors like age, weight, and habits like smoking and drinking.

In a 2013 study published within the journal Cancer Epidemology, Biomarkers and Prevention,researchers found an increased incidence and severity of prostate cancer in patients with sleep issues. After following 2,425 Icelandic men between the ages of 67 and 96 for three to seven years, researchers discovered that the danger of developing prostate cancer rose in 60 percent of men who had trouble falling asleep. This number doubled with men who reported having difficulty staying asleep. What’s more, those who experienced sleep problems were also more likely to have later stages of prostate cancer.

This article was republished from Medical Daily. You can find the original article here.