The 6 Most Evil Dishes From Around The World

Others
By Staff Contributor
October 25, 2013

Most people like to eat meat. Either by being used to the tastes fed to them from their childhood or with the sustained desire for diverse tastes. Many people around the world starting to realize, that vegetarianism and veganism at times the best way to enjoy a meal. As by eating meat, more often than not we become a part of animal cruelty practiced by majority in the industry. And it’s no secret that the life of an animal headed for the slaughterhouse isn’t all smiles and happy songs.

But sometimes you run across a dish that requires that the animal not only be killed, but tortured in some horrifying and diabolical way first. Below are the dishes that prove that sometimes, humans are the worst of any kind. 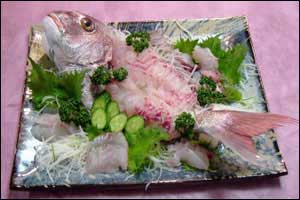 Imagine you are in Japan. You want to make the best of the situation and experience some authentic Japanese cuisine. You walk in to a sushi place and order the first thing that sounds appetizing. “Oh,” you say to yourself, “Ikizukuri. What an appetizing jumble of Japanese sounding syllables.” And just then, a scene of pure unspeakable horror unveils before your terrified eyes as the cook grabs a fish out of a tank and starts slicing it up while it flops around on the cutting board in front of you. Then he throws it on your plate, the fish still twitching and knocking around your side dishes.

“Ikizukuri” literally means “prepared alive” and it delivers on everything the name implies and explicitly states:

You can even choose your own fish for the kill, so if you’re a devil’s advocate you can go for the one which seems happiest at the moment. The chef will then use his Matrix skills to partially gut and cut it up in mere seconds and serve it you. The trick here? He must cut the fish without killing it. With its heart exposed and beating, gills still working, trying to gasp for air and those last few seconds of pain-filled consciousness, staring at you with its slowly dying eyes which ask you in a fainting tone… “Why… . why… wh… y… w,” your fish is ready for eating.

Often the chef will take the pieces he cut from the fish and “reassemble” them, like some nightmarish jigsaw puzzle. It might be considered quite spectacular from a culinary point of view to them, but thinking of it as some form of sick joke to taunt the fish is much more rewarding.

For an equally horrifying variation, the Chinese have Yin Yang Fish, which involves dipping the living fish into oil and frying it alive, but again just enough that it is still living right up until you plunge your fork into its terrified little face. 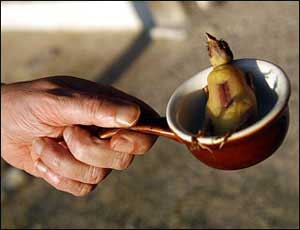 An ortolan bird is about six inches long and weighs just four ounces. It’s olive green and yellow, with a touch of ruby here and there. Most people who look at them immediately want to keep ortolans as pets and give them funny un-bird like names, such as Jerry or Ginger.

Others want to torture and drown them for gluttonous needs of gourmets everywhere.

The recipe for ortolan is this: Capture the bird in the wild, blind it using a pair of pincers, stick it in a tight cage so it can’t move, keep it on a diet of millet, grapes and figs until it reaches two to four times its normal size, and then drown it in a snifter of Armagnac. We are still undecided if the last part makes this whole dish gruesome or totally evil sweet. 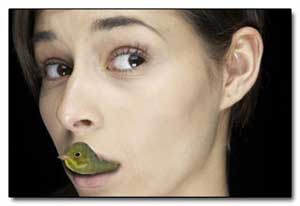 The secret to enjoying Ortolan is in the way you eat it. After roasting the bird for six to eight minutes, you cover your face with a napkin, place the whole bird inside your mouth, with only it’s head and beak sticking out… and bite down.

The head falls into the napkin, while you slowly bite through Jerry’s tiny bones, tiny muscles and even tinier innards. The finale comes when you bite through its lungs and stomach, releasing pockets of brandy into your mouth.

The covering your face with a napkin part is said to have been started by a priest, Jean Anthelme Brillat-Savarin, who did it to hide his gluttony from God he made a living from. 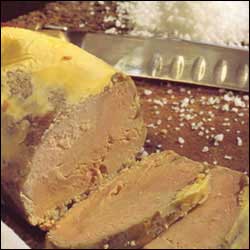 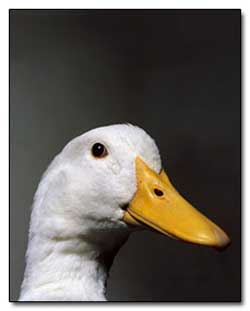 “Foie Gras” is a French dish meaning “fatty liver,” and said liver comes from either ducks or geese. From the moment the ducks and geese are born they are allowed to frolic freely, feeding on grass as much as they want; the poultry equivalent of a life-time ticket to Disneyland. Day after day the little ducklings and goslings run around, play grab and eat until they can eat no more.

Then, they are taken to a dark room, put in little fowl coffins and force fed corn with fat until their livers reach six times their normal size.

Yes, the buttery texture of Foie Gras is achieved by sticking a long metal pipe down the bird’s esophagus and pneumatically pumping a pound of a greasy corn mix directly into their digestive systems, which then gets deposited straight in their livers, thus expanding and saturating them with fat.

The birds are allowed to run around and indulge on grass when they are young, not to alleviate the farmer’s guilt about what is to come, but to strengthen their esophagi so that they don’t die during the food gun period, which can last two or three weeks (with two “meals” each day). 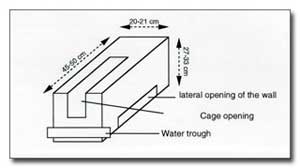 You might be surprised to know that both the ducks and the geese don’t take too kindly to being orally probed and force fed corn. Therefore the preferred method of keeping the birds from struggling and exercising is by sticking them in little boxes where the little poor birds can’t spread their wings or even stand up.

At this point the ducks/geese are taken to slaughter, presumably being insulted the whole way. 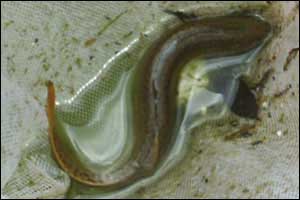 Your basic recipe for Tofu Hell is easy as baby kitten pie. You start boiling some water and when it gets hot you place a block of tofu on the bottom, immediately adding the baby which will try to escape being boiled alive by plunging straight into the still cold tofu.

And this is when Ashton Kutcher jumps out from behind and yells “we punk’d you!” because just then the baby loaches start to notice that something smells nice. Them. The tofu starts cooking and the little fish, who just a few seconds ago were certain they escaped a boiling death and rejoiced at the thought that there was still a chance they will see their parents again, are cooked alive inside it. 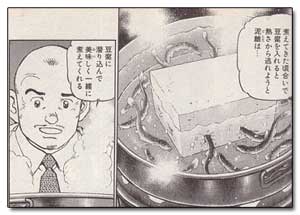 The final product resembles Swiss cheese to a degree. Only this time, the holes were not created via a fermentation process, but by baby loaches trying to escape a pot of boiling water, tears streaming down their little face as they fondly remember their little baby room with the ThunderCats bed-spread and the poster of TMNT on the wall.

There is still a lot of confusion over whether the dish is real or not. We have found the below picture of the dish being prepared, but cannot determine whether or not it is an actual photo. 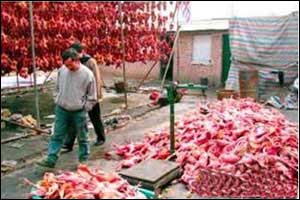 Feng Gan Ji literally means “wind dried chicken,” which sounds like a new eco-hippy marketing campaign devised by the Colonel. To prepare this dish, you basically need four things: A chicken, a sharp knife, an exceptionally well skilled chef and a heart as black and cold as the most lifeless corners of outer space.

Remember that scene in The Dark Knight where it turned out the Joker sewed a bomb inside his henchman’s stomach? Feng Gan Ji is quite similar to it, only instead of a bomb the chef uses marinade, spices, herbs and whatever culinary secret ingredients, after cutting open the still-alive chicken, removing its intestines and sewing it back up. The chicken is then strung upside down to dry in the wind. 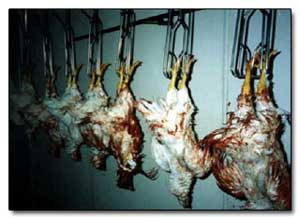 The chickens usually suffer a few agonizing seconds of consciousness after the ordeal, dangling on the string, clucking away in the wind, screaming “For the love of God, why are you doing this to us?!” as they are forced to see hundreds of their fellow chickens subjected to the same torture. And when the bird clucks its final “cluck” the last thing it will see will be its mangled and tortured brothers and sisters. 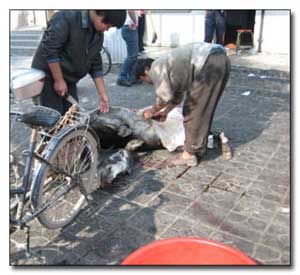 For many meat eaters donkeys deemed edible. How sick can be eating it alive though?

You heard us. Donkey meat is quite popular in China, and as easily obtainable as pork or beef. However, a recipe for a certain delicacy made from donkey reads like an ancient torture technique.

The dish in question is known in China as Huo Jia Lu (literally “Live Donkey”). The animal has its legs tied and its body held down, while the Torture Squad, known colloquially in China as “chefs,” cut its supple raw body and serve it immediately to the diners who quietly eat it among the earsplitting cries of the animal.

There is a variation of this dish called Jiao Lu Rou (“Water Donkey Meat”), where a butcher would cut the donkey’s skin and pour boiling water on its raw flesh until it was cooked. He would then take his knife and…

Ah, let’s finish it. We can’t keep talking about this as humans. Just know, that there are some call  themselves “humans” but not so by any standards. I am not sure what you should be calling them, as we are in a path that we can’t even call them cowards or maniacs.

Next time you travel, just be sure what you are eating and how it got there.

We love animals. And we do not eat them but pet them.