8 Things They Don’t Tell You About Horse Racing 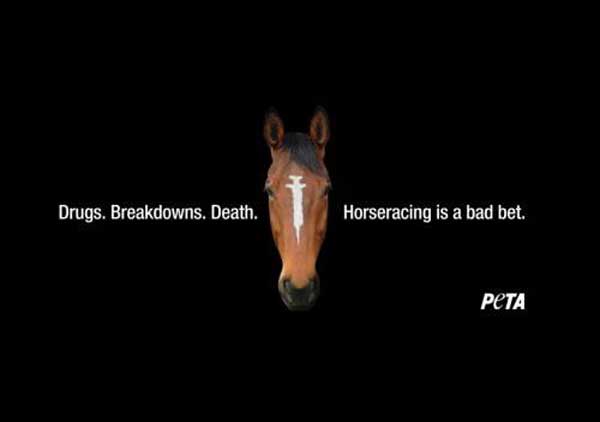 Whatever the results of this year’s Grand National, there’s one thing that you can bet on with confidence – horses will suffer as a result of the unethical spectacle at Aintree.

PETA US has just made headlines with its searing undercover investigation into cruel and illegal industry practices among horse trainers in the US. But here in the UK, horses hardly face better odds. The following are a few home truths about horse racing, which make it clear that the Grand National and races like it are a national disgrace:

Eight horses have died at Aintree in the past two years. Four died at Cheltenham this year. Their deaths were traumatic and frightening, a stomach-churning mess of tangled limbs, fractured bones and broken spines.

Jockey Ruby Walsh caused a scandal with his comment on the death of Our Conor at Cheltenham: “You can replace a horse“. But his callous remark served only to highlight the widespread attitude within an industry that treats horses as commodities, not as sensitive, sentient animals.HORSE EYE

Drugs, both legal and illegal, are as ubiquitous at the racetrack as silly-looking hats are at Ascot. Horses are often drugged to mask their pain and keep them running when they should be resting or receiving treatment. Last year, trainer Mahmood al-Zarooni was banned from racing for eight years after he doped horses with prohibited steroids at one of the world’s leading racing operations. Billboard

4)      Former race horses are “retired” to the slaughterhouse.

According to Animal Aid, around 1,000 horses from the racing industry are killed in slaughterhouses in Britain every year, to be turned into dog food or horsemeat. Other horses may face horrific live export to Europe.Horsemeat“

The infamous Becher’s Brook is known as the world’s most dangerous jump and has racked up many fatalities, yet authorities refuse to remove it. Racing 40 skittish horses at a time makes accidents still more likely, while the minor so-called “improvements” to the course are simply token gestures. It’s the very dangerousness of the race that draws in crowds and lines bookies’ pockets – while horses pay with their lives.Aintree

Making horses risk their lives on the racecourse is wrong at any age. But it’s especially heartbreaking to learn that these animals may begin to race when they’re barely more than babies and their bones are not up to the pounding and stress of the track. It’s hardly surprising, then, that injuries, lameness and exhaustion are common afflictions.HORSE

To hurt an animal deliberately is illegal in most other circumstances, but riders at the Grand National are actually required  to carry whips – despite the RSPCA’s verdict that “[u]sing whips can cause pain and suffering to the horses” and often makes them run beyond their usual capability, increasing the likelihood of accidents. Frequently, jockeys violate  the already watered-down whipping regulations, which dictate how often and where they hit horses.Muybridge_horse_gallop_animated_2

Owners of horses in the Grand National often mistake their love of money and glory for a love of the horses, but the facts make it clear what the industry is really worth.MONEY

People who care about horses are turning their backs on the Grand National and every other race in which horses are being run to death.

This cruelty will end only when the public realises that there is no such thing as a “harmless flutter” when it comes to funding the cruel and exploitative horse-racing industry.

Please help spread the word about the cruelty of horse racing….

Previous articleReady to flip the genders? Experience it now.
Next articleWhat will humans look like in 100,000 years?
Digital Media