A Buddhist Monk Shows “Unheard Of” Brain Activity During Meditation 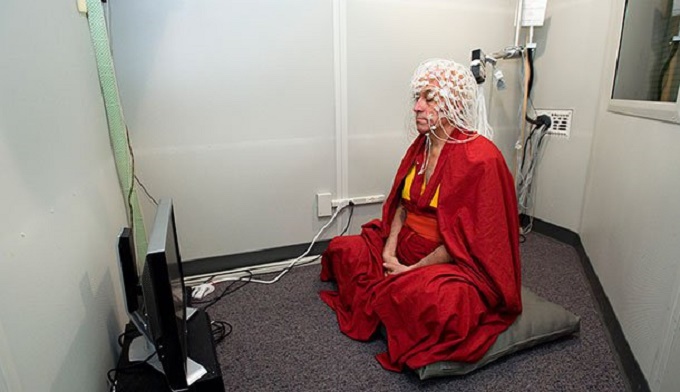 What if happiness was a skill you could learn to master?  According to Matthieu Ricard, a 66 year old Tibetan Monk and geneticist, it is.  Ricard has submitted to scientific testing which revealed a brain wave pattern unheard of by neuroscientists.  The unusual activity in his brain accounts for what scientists say makes Ricard ‘the happiest man in the world”.

“Meditating is like lifting weights or exercising for the mind”, Ricard told the Daily News. “Anyone can be happy by simply training their brain”, he says.

To study the physiological states Ricard enters into and to understand how quantitatively happy he is, neuroscientists at the University of Wisconsin placed 256 sensors onto Ricar’d skull and asked him to meditate.  Ricard performed compassion meditation and the neuroscientists could hardly believe what they were seeing. The monk’s brain was producing a level of gamma waves that went entirely off the charts. They found also that his brain demonstrated extreme activity in the left prefontal cortex in comparison to the right.  What this means is he exhibits an unusually great capacity for experiencing happiness with a much lower than normal tendency towards negativity.

As part of the same study, the researches delved into the minds of other practicing monks to see if the results may be comparable.  It was revealed that monks who were long-term meditators- meaning who had sat in 50,000+ rounds of meditation, exhibited altered brain function in important ways, though they also found that individuals who practiced meditation for only 20 minutes a day for 3 weeks demonstrated some degree of change as well.

The monk wishes to spread his amazing happiness and meditation benefits and so he has written a book called Happiness: A Guide to Developing Life’s Most Important Skill.  The proceeds from selling his book are donated towards more than 100 humanitarian projects.

“Try sincerely to check, to investigate,” he explained to the Daily News. “That’s what Buddhism has been trying to unravel — the mechanism of happiness and suffering. It is a science of the mind.”

How our brains have gotten so off track that a huge percentage of people on our planet are not effortlessly happy would be an extensive topic for another article. Yet what I love about Ricard’s message and these findings is that we have the power to literally program our brain to produce good feeling emotions and this is no doubt connected to harnessing the powerful effect our thoughts have on our bodies and overall well being.

It seems that the more often we can allow our brains to tap into these certain brainwave states, associated with being clear-headed, relaxed, alert, conscious, and at peace, the more able we will be to consciously switch into these states of brain function while meditating, but also while going about our daily lives as well.  It can all start, as this study shows, with a short meditation session every day- as little as 20 minutes.

It also includes monitoring one’s thoughts and developing awareness within our though processes. The more we can cultivate a conscious relationship with what we are thinking, the more control we take back from ourselves and the more and more we steer our own ship of consciousness, so to speak, rather than being navigated by automatic thought patterns and at times by beliefs and thoughts that are not in alignment with our well being or who we really are. Time for an upgrade!

As themindunleashed.com puts it, One of the greatest American filmmakers, television director, visual artist and musician is David Lynch. Lynch is an advocate of the use of Transcendental Meditation (TM) in bringing peace to the world. His passion to help students learn the TM techniques has launched the David Lynch Foundation For Consciousness-Based Education and Peace. In this video, David Lynch answers a couple of questions on his understanding of how TM can affect creativity and overall learning and expansion of the human mind.”