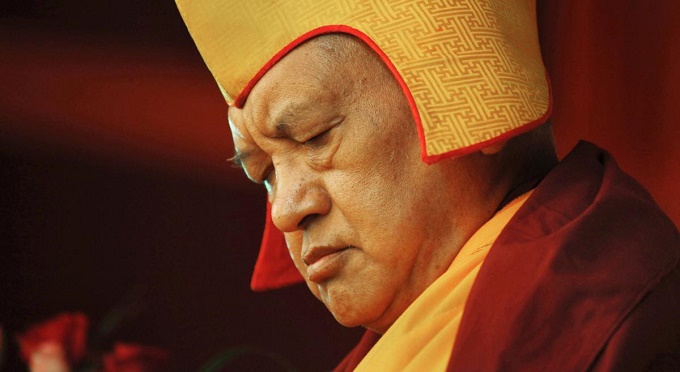 My most dear one,
Thank you very much for your kind letter. I don’t eat sugar. As you know, I have diabetes. Sometimes I eat honey or other fruit which is sweet but not sugar, especially nowadays. In the past for a long time I was very strict, but not now. I am now following this diet—not entirely but mostly. [See the DVD Tackling Diabetes With Dr. Neal Barnard.] This one says fruit doesn’t matter, so I can have all the fruits. For quite a long time I was very strict, having no sweet fruits, but nowadays I do eat fruit, even sweet fruits.

If you want to benefit other sentient beings, to free them from the oceans of samsaric sufferings and bring them to peerless happiness and omniscient mind, then you have to reveal Dharma to them. So you need to learn Dharma and practice Dharma, and for that you need a long life and to be healthy, so don’t eat sugar. You know it is harming your health, so why do you eat sugar? That’s ridiculous. If possible, abandon sugar for awhile. If not, then at least cut it down to a very small amount. Make the amount of sugar very, very small or don’t eat it for some years.

Then about meat, I would like to say, please reduce eating meat, as it does so much harm to others and even to one’s own body. This is not just belief, it’s now even accepted scientifically. If you can avoid meat, it’s so good. Wow, wow, wow! All the buddhas and bodhisattvas  will be so happy with you, just as a mother loves her beloved child, cherishing her child so much. When her child does something good that makes the mother so unbelievable happy.

So if possible, abandon meat or cut down eating meat. The conclusion is that if less people eat meat, that means more animals won’t suffer from being killed. That’s the benefit, so please think about this. Don’t think about the pleasure of eating [meat] without thinking about reincarnation, karma and the lower realms. Instead of just thinking about the pleasure of eating meat, think about the suffering of the animals when they are being killed, and think of yourself being at the butcher’s place, about to be killed. How does that feel? If you’re about to be killed, like the animals, how does that feel? Do you like that?

So if you really think Dharma is to not harm sentient beings, then don’t eat meat, or at least eat very little. Not eating meat is OK. So many young people in the West don’t eat meat and are still healthy; they can supplement their diet with other things.  So many people [are vegetarian] now, young and old, and its increasing more and more.

I don’t know if you attend the center’s tsog days.  During tsog you have to have bala and madana—bala is meat and madana is wine. That means taking a very small amount, not drinking a whole bottle of wine. Just take a drop and take it as blessing, and think that you are taking it as a blessing, not that you are taking alcohol. That’s why the name is changed. You just take a tiny amount as a blessing, not with the recognition of eating meat or drinking wine. That’s why the name is changed to bala and madana. I am not sure if you have taken a Highest Yoga Tantra initiation or not, but when you take [the meat and alcohol] you are supposed to take it with the meditation of great bliss. So without the conception of meat and wine.

My guru Kyabje Tsenshab Serkong Rinpoche said that when taking eight Mahayana precepts, on that day you can just touch the meat and the wine, without putting it into your mouth, so then you are still taking the blessing but not actually eating. That is to hook the realization of clear light and illusory body, the tantric realization that causes us to achieve the dharmakaya and rupakaya—the Buddha’s holy body and mind—for sentient beings.

With much love and prayers,

Previous articleThe Buddha: Our Spiritual ‘Contemporary’
Next articleHow To Detox Your Lungs After You Quit Smoking
Digital Media