The Amazing Cancer Kid: Kid who won the cancer battle when doctors themselves gave up

This story is pretty amazing. We have seen people debate all over the world on how ineffective the chemo therapy is. Although nothing is proved beyond doubt, chemo therapy certainly seems not the best medication process for cancer. Maybe, this story will bring you a different perspective that goes beyond traditional cancer therapies. We welcome your comments on this and please pass it on to anyone who might need this info.

A boy with a rare form of childhood cancer who was not expected to live past the age of five is starting secondary school.

Connah Broom, 11, from Flintshire, was diagnosed with neuroblastoma in 2006 and had 11 tumours. Despite chemotherapy failing for Connah, of Gronant near Prestatyn, and other traditional treatments ruled out, 10 of his tumours have shrunk.

He has started school in Prestatyn, and plans to publish a book next month. Neuroblastoma affects about 100 children in the UK every year and generally has a poor prognosis. When conventional treatment was ruled out for Connah his family took him to Mexico for a non-proven alternative treatment.

I’m feeling very good actually. I can’t wait to go to high school”, Connah Broom. His family believe that the alternative treatment they organised themselves, called photodynamic therapy (PDT), was responsible for destroying 10 of Connah’s 11 tumours. However, Connah’s GP Dr Eamonn Jessup, from Prestatyn Central Surgery, has previously said he is unsure whether the PDT treatment has had an effect on Connah’s tumours.

However Connah’s grandmother Debbie Broom believes the treatment he had in 2011 has helped him. He still has a primary tumour in his abdomen but it does not stop him taking part in activities such as street dance and football.

Mrs Broom said: “We went in February for scans and they showed again just the one tumour – the primary. It had reduced slightly, not as quick as we were hoping for unfortunately, but we’re getting there. “Dr Mark Gaze at UCL (University College London Hospitals) has now said don’t come twice a year, we’ll do scans once a year so it’s going to be every February unless we have a problem.

Mrs Broom said it had been an emotional journey but Connah’s progress over seven years had been remarkable. “We’ve gone back to school full-time,” she said. “We’ve finished infants, it was such a thing to get into juniors, and we’ve done the juniors and now we’re doing the high school.

“People say ‘we’ve done it’, Jim and I and Connah’s dad Chris. It’s not us; it’s Connah that’s done it.” Connah said he would miss the teachers and pupils at his old primary school but he was “moving on”.

His book, the Amazing Cancer Kid, is published on 10 October which he hopes will inspire others in a similar situation.

Our motive for writing the book was to inform people of Connah’s story and to highlight how once you start to question what is being done with regards to medical treatment and to research other options the people who you believe are there to help and support you soon turn there backs on you. However our GP has been incredibly supportive to us and we thank him for that.

We want other families to know that whilst there children are being treated in the hospital there are things that they can do to help them through and even reduce some of the harmful effects of chemotherapy. Also there are alternatives to look at rather than giving up to the Doctors final statement ” There is nothing more we can do, just go home and enjoy the time you have left”!

Our motto is “Never Give Up”! 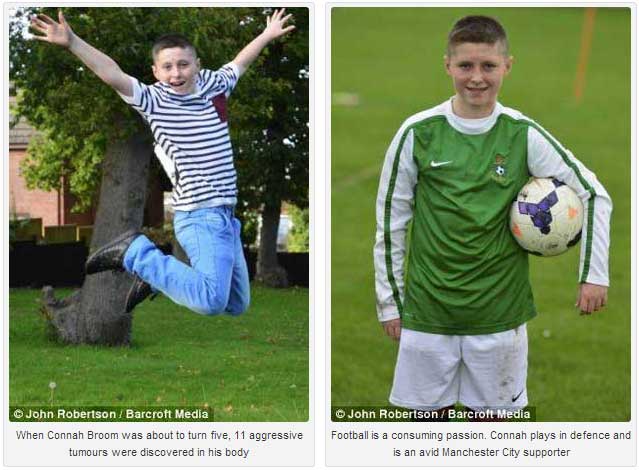