We bring you two stories of amazing mother dogs who saved their children at emergency disaster conditions. Such conditions may have easily prompted these dogs to find rescue for themselves or easily prompting them to forget the puppies given the condition. However, man’s best friend Dogs prove time to time why they are the closest to humans.

A heroic mother dog saved her 10-day-old puppies from a house fire; board them to a fire truck

A heroic mother dog saved her 10-day-old puppies from a house fire in Santa Rosa de Temuco, Chile on Thursday. Sensing the danger to her babies, she picked the pups up in her mouth and moved them from the burning house to the safety of the nearby fire truck. She then gently placed the pups on the steps of the fire-truck as firefighters fought the blaze. 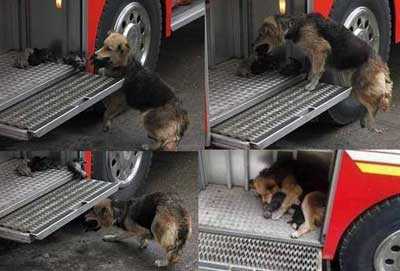 According to SoyChile, the German shepherd mix named Amanda rescued her pups alongside of firemen when the blaze broke out in her family’s home. Amanda and her pups were taken to the veterinarian, but one puppy named Amparo, who had suffered severe burns, later died. The veterinarian said that Amanda’s four other puppies were doing really well, but that Amparo had died from her injuries.

The vet, Felipe Lara, said that Amanda had defended her puppies when they tried to take them away from her to care for them. Eventually she let them check over her pups but she wanted to stay with ailing Amparo and did not want to let her from her sight. 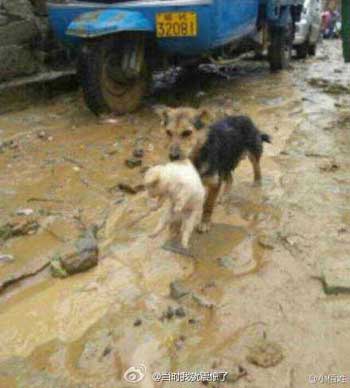 A photo shows that a dog takes a puppy in its mouth running on a muddy mountain road goes viral and touched many people’s lives during last weekend on Chinese Sina Microblog.

In the picture, there is a truck behind the two dogs, with the road full of muddy water. Being taken by the bigger black dog, the white puppy is still looking down at the muddy puddle in front of them. “A scene in the torrential rain of Yan’an,” the textual description said.

In less than four days, nearly 20,000 people forward this photo. Many people commended on it with a red heart which means love. And even someone said it “moved the whole China”.

According to local meteorological department, 27 people died during the torrential rain in Yan’an, and 50,000 were transferred to other safe places.