Some animals are human, But are all humans, human? 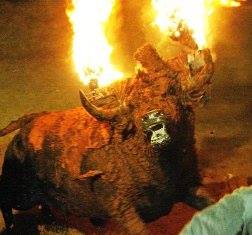 Animal cruelty is not acceptable as entertainment or tradition in the 21st Century. Yet the Toro Jubilo annually occurs in Medinaceli, a province of Soria, Spain. Jeering mobs ~torture~ a bull with balls of burning tar or  turpentine (called “pitch”) attached to his horns. A bull’s horns, body and eyes are scorched. Some try to escape hours of agony by smashing into walls. While different cultures may not understand each other’s customs, all rational humans comprehend cruelty. Setting fire to a live animal — known as Toro de Fuego or “bull on fire” is sadistic and hideous.

Animal cruelty is never acceptable in any civilized culture, giving Spain a reputation as barbarians and hinders tourism. We see it as senseless, and makes us fearful of your people and Country representing a violent and dangerous nation that derive pleasure from torture and sadism.

It is time for all regions of Spain to subscribe to the ethical doctrines that shape our civilized world. Heritage, entertainment, art and religion never justify outright torture. This is called the ‘joy of the Bull’ – or Toro Jubilo festival – is one of the ‘cultural’ highlights of the entertainment calendar for residents in the medieval village of Medinaceli, in the province of Soria, north east of Madrid. 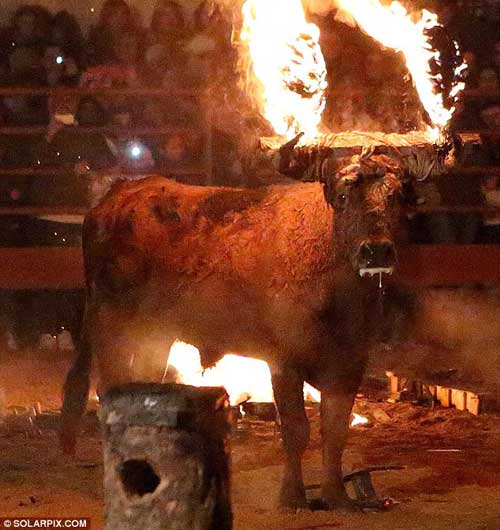 This terrified young bull was dragged into a ring in front of a jeering crowd of 1500. He was then violently pinned to the ground, while men strap wooden stakes doused in flammable chemicals to his horns, and set him on fire. Then local men show their ‘bravery’ by tormenting the terrified animal. Fiercely hot sparks and embers drip from the burning torches onto the bewildered animal. The distressed bull is then released, thrashing around the ring in agony to the cheers of the crowds.

The burning bull is called “Toro de Fuego” (literally “bull on fire”). The bull is then released onto the streets and can do nothing but run around in pain. The bull often smashes into walls in an attempt to douse the fire. The agony the bull must suffer is unimaginable. These fiery balls can burn for hours, and they burn the bull’s horns, body and eyes and cause tremendous stress – all while spectators cheer and run around the victim.

Members of the public are seen jumping around and taunting the bull adding to his terror and confusion. Gasping for air, the bull finally reaches a state of exhaustion after nearly an hour of torment and is soon dragged out to be butchered. The men are awarded pieces of meat from the animal for their ‘bravery’.

See the horror for yourself:

This event is due to take place again on the second weekend in November. We must do all we can to ensure this torture masquerading as ‘tradition’ ends. If you are unable to be in Medinaceli (Madrid) to protest there are some online actions you can take:

2) Contact the Spanish officials directly to urge that they enforce stronger animal cruelty laws that shield animals from all forms of abuse, including vulgar rituals and blood fiestas such as the Toro Jubilo. Contact details can be found in the information of the change.org petition here: http://www.change.org/petitions/live-bull-to-be-set-on-fire-spain-a…