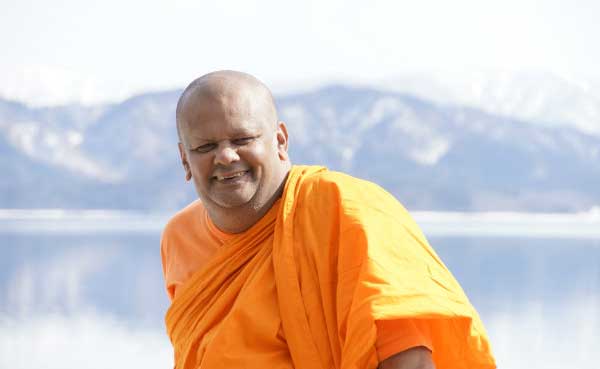 Today marks the birthday of most venerable Mugunuwela Anuruddha Thera, who is the founder and the general secretary of World Buddhist Sangha Youth. We at BBN and Buddhism would like to wish venerable Anuruddha thera a long life with good health. His noble service in uplifting and spreading Buddhism is immensely important as we continue to see a wide interest among global population towards Buddhism. Anuruddha Thera  has travelled to many different countries taking Buddha’s teachings and has setup community groups in respective countries.

The “Anurudha Arana Dhamma Home” opened on 07th March 2014 and an arms giving will be held today, both marking the 50th birthday of Anuruddha Tera.  Main objective of Anurudha Arana is to provide an avenue for young Buddhist monks, nuns and lay Buddhist youth who heed the advice of the Noble Teacher, the Buddha to carry out Dhammaduta work, meet, exchange ideas and thoughts, share their experiences and remain focused in spreading the Noble Truth. The essence of world peace in this modern world has been the point of discussion in many world seminars and conventions. There is no denying that the prime essence of world peace is religious unity and harmony.

Anuddha Thera is a visionary individual whose focus is to inspire people to understand life in line with Buddhism. In pursuit of this, he work hard with World Buddhist Sangha Youth (WBSY) in assisting young monks, nuns and lay Buddhist youth in other countries so that they can effectively engage in Dhamma and helping them stay focused on the ultimate goal of Nibbana, the end of suffering.

As the founder of WBSY he also facilitates monks, nuns and lay Buddhists from the various traditions the opportunity to come together. This is a perfect example of the Buddhist spirit of all for one and one for all. The theme of the second General Conference this year; Unity and Religious harmony’ is most apt considering the senseless killing and suffering inflicted on humans by humans in the name of religion. Not only are they caused by people of different religions but by people of the same religion.

Join us wishing Anuruddha Thero a long life and good health to continue his noble services to Buddhism. May the guidance of the noble triple gem be with you always!

Previous articleMaking a promise is nothing, keeping a promise is everything…
Next articleLarry King Pitches A Fastball On Gay Marriage. A Global Religious Leader Answers With A Grand Slam. What’s your opinion?
Digital Media