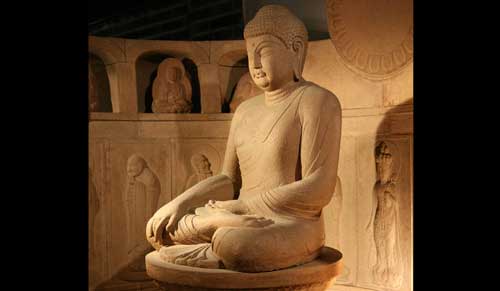 The Buddhahood is not reserved only for chosen people or for supernatural beings. Anyone can become a Buddha. No founder of any other religion ever said that his followers can have the opportunity or potentiality to attain the same position as the founder.

However, attaining Buddhahood is the most difficult task a person can pursue in this world. One must work hard by sacrificing one’s worldly pleasures. One has to develop and purify one’s mind from all evil thoughts in order to obtain this Enlightenment. It will take innumerable births for a person to purify himself and to develop his mind in order to become a Buddha. Long periods of great effort are necessary in order to complete the high qualification of this self-training. The course of this self-training which culminates in Buddhahood, includes self-discipline, self-restraint, superhuman effort, firm determination, and willingness to undergo any kind of suffering for the sake of other living beings who are suffering in this world.1592

This clearly shows that the Buddha did not obtain this supreme Enlightenment by simply praying, worshipping, or making offerings to some supernatural beings. He attained Buddhahood by the purification of His mind and heart. He gained Supreme Enlightenment without the influence of any external, supernatural forces but by the development of His own insight. Thus only a man who has firm determination and courage to overcome all hindrance, weaknesses and selfish desires can attain Buddhahood.

Prince Siddhartha did not attain Buddhahood overnight simply by sitting under the Bodhi tree. No supernatural being appeared and revealed anything by whispering into His ear while He was in deep meditation under the Bodhi tree. Behind His Supreme Enlightenment there was a long history of previous births. Many of the Jataka stories tell us how He worked hard by sacrificing His life in many previous births to attain His Supreme Buddhahood. No one can attain Buddhahood without devoting many lifetimes practicing the ten perfections explains why a Supreme Buddha appears only at every long intervals of time.

Therefore, the Buddha’s advice to His followers is that in order to find their salvation it is not necessary for each and every person to wait until he gains his Buddhahood. Aspirants can also find their salvation by becoming Pacceka Buddha (Silent Buddha) or Arahantas – (saints). Pacceka Buddhas appear in this world during the period when there is no other Enlightened Buddha. They are also enlightened. Although their degree of perfection is not similar to that of the Supreme Buddha, they experience the same Nibbanic bliss. Unlike the Supreme Buddha, they do not preach to the masses. They lead a life of solitude.

Arahantas can also experience the same Nibbanic bliss as the Buddhas do. There is no discrimination or status in Nibbana. The only difference is that Arahantas do not have the Supreme Enlightenment to be able to enlighten others in the same way as the Buddhas do. Arahantas have overcome all their desires and other human weaknesses. They can appreciate the Dhamma which was discovered and taught by the Buddha. They can also show others the correct Buddhist way of life and the Path to salvation.

Rare is the appearance of the Buddhas.(Dhammapada 182).