Do a little check before driving: You may save a life. 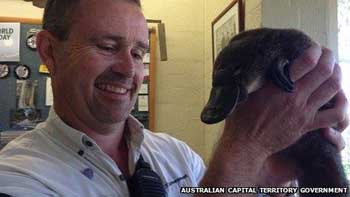 We hear many stories that animals get killed by careless drivers. Some times, your pet too can get killed as we forget that they may sleep under your vehicle. This story by BBC reminds us the need to do a little check after an overnight parking. Spend a minute of your time before driving and be compassionate.

A platypus that got stuck in a car engine in Australia has been safely released back into the wild, Australian conservation officials say. The female platypus wedged itself inside the engine bay of a car driving through a flooded river crossing south of Canberra late on Wednesday.

It was driven more than 15km (9 miles) before the driver realised an animal was in the car. Officials described the incident as a “one-in-a-million” event. The driver, Cameron Blaseotto, said he heard scratching from under his car bonnet when he parked his car. He and his friend “originally thought a possum or something was going to jump out at both of us”, he told Australian broadcaster ABC. 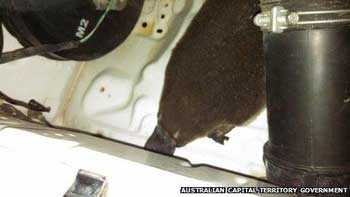 The platypus in the car engine bay Officials said the platypus may have got inside the car by climbing up a tyre “We had a bit of an argument about who was going to open the engine bay,” he added. They were surprised to discover a platypus stuck in the engine bay, and called the territory’s Parks and Conservation Service.

“Our urban wildlife rangers get calls ranging from snakes in houses to quolls (a carnivorous marsupial) in trees, but this was definitely one of our most unusual calls,” Regional Operations Manager Brett McNamara said. “There’s obviously many moving parts within an engine bay and given platypus have claws there is not much to hang onto,” he said.

“How this animal was able to climb up inside, hang on, and then drive all the way back into Canberra is a truly remarkable story.” Mr McNamara added that the platypus, who was in perfect health, was returned to her home and released on Thursday morning.

Platypuses – egg-laying mammals with a duck-like bill – are native to Australia.

Previous articleThe death toll from a stampede at a Hindu festival risen to 109
Next articleWhat is Buddhism?
Digital Media