WHY WOMEN ARE BETTER COPS !

This story is worth sharing. The power of Giving ! 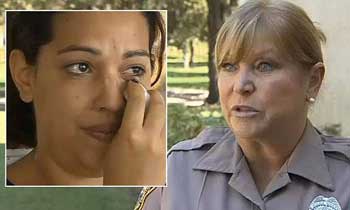 The woman on the left is a mother from Miami who was so desperate to feed her hungry family that she was trying to steal a lot of food.

The woman on the right is Miami-Dade County Police Officer Vicki Thomas. Officer Thomas was about to arrest Jessica Robles but changed her mind at the last minute. Instead of arresting her, she bought Robles $100 worth of groceries:

“I made the decision to buy her some groceries because arresting her wasn’t going to solve the problem with her children being hungry.”

And there’s no denying they were hungry. Robles’ 12 year old daughter started crying when she told local TV station WSVN about how dire their situation was:

“[It’s] not fun to see my brother in the dirt hungry, asking for food, and we have to tell him, ‘There is nothing here.’” Officer Thomas says she has no question that what she did was right:

“To see them go through the bags when we brought them in, it was like Christmas. That $100 to me was worth it.” But Officer Thomas did have one request:

“The only thing I asked of her is, when she gets on her feet, that she help someone else out. And she said she would.”

And guess what? The story gets even better.

After word got out about what happened people donated another $700 for Jessica Robles to spend at the grocery store.  And then best of all a local business owner invited her in for an interview and ended up hiring her on the spot as a customer service rep.

She started crying when he told her:

“There’s no words how grateful I am that you took your time and helped somebody out. Especially somebody like me.” And to think it all started with one veteran police officer trusting her “instinct” instead of going “by the book”.