During last few years, there have been a number of reports of communal violence against Buddhists in Bangladesh. Although such tensions have always existed, recently we have seen an increase in the vandalization of Buddhist houses and temples or murders and displacements of people. It is not improbable to surmise that many smaller events go unreported in the popular media. 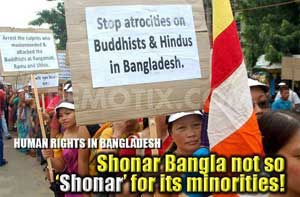 These incidents have mostly been shown in terms of extremist Muslim hatred against minority religious communities. While this might be partially true, there are various other factors that must be considered in order to understand the overall situation. There is also little quantifiable data about Buddhism in Bangladesh. Here, depending merely on the news reports and my limited knowledge, I will only briefly touch upon two important points.

Firstly, it is important to understand these events in the context of the contemporary political situation in Bangladesh. Since Buddhists and Muslims co-existed peacefully for many years, the sudden outburst of extremist hatred during the Ramu events (where 22 Buddhist monasteries and many houses were burnt down to ashes by the end of September), 2012 seems an aberration. Of course, subsequently the political links operating at the background have not gone unreported. It was a well-planned attack by certain section of political groups in order to achieve some devious gains. Political parties use all sorts of techniques to gain and sustain power. In the Ramu events, Buddhists have clearly been used. It is hard to know for certain what exactly the perpetuators’ motivations were. But given the context of upcoming elections, each of the political parties are using various tactics to secure support or to create distrust against their opposition. Reconstructing many of the Buddhist temples within a period of ten months, the present government has regained some trust from Buddhists. It will, however, take long to cure the wounds of insecurity and fear inflicted on their hearts. 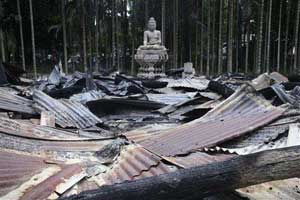 Although similar violence happened for a long time in Chittagong Hill Tracts (CHT) Ramu incident is among the very first major attacks targeted to Buddhists in the plain lands. Recently a popular daily newspaper in Bangladesh also reported a similar incident against a Buddhist family in Comilla district. This geographical expansion of the violence against Buddhists from CHT to the plain lands puts the entire Buddhist community in anxiety and insecurity.

Secondly, it is important to understand that there is a very important economic link to these attacks. The reason for many of the communal clashes in CHT has been due to land disputes. The government statistics themselves show that there has been an increasing growth in the number of Muslim settlers in CHT. These poor settlers brought from various other parts of Bangladesh have admitted that governments helped them to make houses in CHT and gave them military protection. The lands where they build the houses originally belonged to indigenous people who are mostly Buddhists. Therefore disputes are bound to happen. The governments of Bangladesh in the last four decades have either consciously avoided this issue or addressed it poorly and unsuccessfully. Violence still continues. Settlers given military protection, the indigenous people have only the choice to run away from their homelands. Thousands of indigenous people have fled to neighboring states of India seeking shelter and living a miserable life. Indian states themselves having problems express reluctance to welcome new troubles. A handful of the refugees face unspeakable difficulties trying to migrate to various countries of Europe and America. Therefore, neglected by government, dismissed from their own lands and unwelcome by their neighbors, the minority Buddhists have nowhere to go.

In spite of these two points operating at the background the truth is that the ethnic and religious minority in Bangladesh is suffering. Thousands of miles apart sitting in our comfortable sofas, we hear or read headlines of whatever the little is reported in the international media. But the actual situation is very severe. The existence of a community is severely threatened by religious discrimination, devious political motives, and economic deprivation. It is my sincere plea to the international community to express their concerns, put pressure on relevant authorities in Bangladesh, and take protective measures to save the oppressed Buddhist minority.

Previous articleWorldly Way and Liberation, by Ajahn Chah
Next articleCA Police Arrest innocent Man then shoot his Dog in Front of Him
Medicare