Others
By Staff Contributor
October 24, 2013 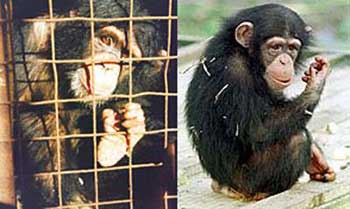 Most parts in India, Indonesia and some Asian countries use monkeys to various shows and circuses to satisfy the visiting tourists. Sadly there are a lot of tourists are enjoying these acts of monkeys and they pay a fee for the entertainment provided. It is true that people earn a buck out of it and it helps them in some way. But we often forget the suffering the monkey goes through.

Monkeys are wild animals with unique characters and high intelligence. They are protected under the Wildlife Protection Act, 1972 in India and elsewhere in most Asian countries. But these performing animals are wearing cloths, smoking cigarettes and performing hard circuses in the streets of South Asian cities. Govt. of India banned these performances, but failed to their immediate rescue and rehabilitation. As there is no alternative plan for these domesticated monkeys and the demand for these shows at tourist sites the practice still continuing. 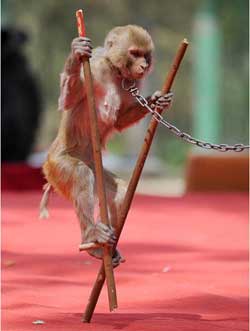 There are places that train these monkeys in India. When you visit some parts of India, you may be asked if you would like to see such places. Often the intention is to showcase a part of their culture. As a tourist you may expect a sanctuary but what you’d see is otherwise. One tourist wrote this on trip adviser.

“I went there with my husband and 21 month old son and found it very upsetting. The monkeys were all tethered on chains and ropes with not enough room to climb (which is what they naturally want to do). The monkeys seemed distressed or depressed and one of them lashed out at my son. We left very quickly after that. I would not recommend this place unless they make some major changes to the well being and care of the monkeys for example by rotating the number of monkeys tied up so that they only have to be tied up for an hour at a time. I would also like to know where they monkeys are kept for the rest of the time. Do they have trees to climb and enough space to play with each other?”

Masked street monkeys in Jakarta, Indonesia are forced to wear bizarre costumes and give street performances as their owners collect money from spectators. The emaciated long-tailed macaque monkeys are made to wear doll masks, wigs, and clothes and perform human tasks such as riding bikes, rocking horses and scooters. 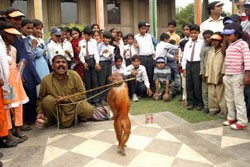 Many are brutally trained to walk upright by being hung upside down, or having their hands tied behind their backs. In the first two weeks of being trained to perform cruel circus activities, countless monkeys suffer incredibly and die. Animal activists in Jakarta too have said the practice is cruel, and illegal.

We humans exploit every animal for our pleasure. Some for palm oil, some for ivory, some for food, some for clothing and others for entertainment. It’s time that we realize our fun for few minutes leaves this animal’s entire life in total disarray. It’s time we say, “We only like to see animals in their habitat free of any type of cruelty”.