Others
By Staff Contributor
October 31, 2013 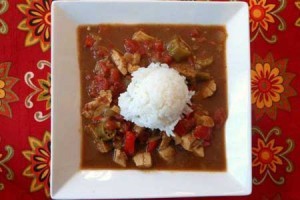 The annual Tremé Creole Gumbo Festival in New Orleans is always a hotly-anticipated event for music-lovers and foodies alike. Having played host to jazz performers such as Pocket Aces Brass Band, The Dirty Dozen, and Rebirth Brass Band in previous years, the 2013 line-up is set to include Hot 8 Brass Band, Glen David Andrews, Robin Barnes, and Baby Boyz Brass Band.

Vegan attendees, however, frequently find themselves stuck for dining options, as the meals on offer, like most traditional Southern dishes, are based on meat and dairy – though they can be adapted to suit vegan preferences.

But now, thanks to PETA‘s work with New Orleans Jazz & Heritage Festival and Foundation, this year’s event is to adapt its menu so that each chef will offer a vegan option for the first time in the festival’s history!

As if that wasn’t exciting enough, there will also be a vegan gumbo cook-off competition on Saturday, Nov. 9, with a judging panel comprised of New Orleans food writers and celebrity chefs. The grand prize on offer is a $1,000 gift certificate to the Food Network’s online store. The Restaurant Depot and Whole Foods will also donate prizes to each participant.

PETA reports that the response to this competition has been overwhelmingly positive to date. Chefs from well-known local restaurants such as Dickie Brennan’s Bourbon House, Lil’Dizzy’s, and Ms.Linda’s have signed up to participate.

The festival, which is free of charge, runs from Nov. 9 to 10 in New Orleans’ Louis Armstrong Park, from 11 a.m. to 6:30 p.m. each day. But if you can’t be there in person – and all this talk of delicious vegan food has got your tummy rumbling – why not try making some Southern-style Vegan ‘meat’ loaf, or Vegan ‘chicken’ and ‘sausage’ gumbo?