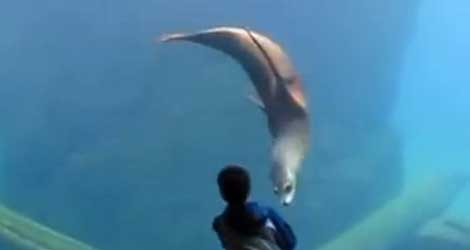 It’s clear that this little boy is having one fantastic day, hanging out with a frisky, friendly sea lion at the National Zoo:

“This is the best thing of my life!” yells Alex, a 7-year-old Virginian with Asperger’s syndrome whose mom, Jennifer Bittner, took a video of her son’s awesome playdate with Sophie the pinniped.

“It was amazing to witness the connection that the beautiful creature and my son seemed to share,” Bittner told D.C.’s Fox affiliate. “He sometimes has trouble interacting and playing with children his own age, but he and the sea lion seemed perfectly in sync.”

And how was it for the sea lion? Since we were unable to get through to Sophie directly — just try getting a sea lion to answer email — we asked an expert to weigh in on what she saw when looking at this video.

“Sea lions are active, curious animals and this looks like a young sea lion having a good time chasing and playing, which is what wild young sea lions spend a lot of time doing as well,” says Colleen Reichmuth, a marine biologist at UC Santa Cruz’s Long Marine Lab. “The National Zoo is a wonderful facility and this looks like a happy and healthy California sea lion.”

Jill Goldman, a certified animal behaviorist, observed via email that she saw Sophie and Alex having “made a brief connection in fun” — perhaps spurred by Sophie’s desire to “relieve the boredom of captivity.”

“I have seen very similar behaviors from walruses, sea lions and seals living in captivity,” says Reichmuth, explaining that young sea mammals and young people like to play in similar ways, and have matching staminas, which can lead to some pretty great moments. “It’s very healthy for sea lions to get variable kinds of visible stimulation and to engage in interactive behavior, as long as it does not cause them to become stressed or frustrated.”

And indeed, this isn’t Sophie’s first time engaging with a small person. Here’s a video of her swimming alongside a little girl who was running back and forth in front of the sea lion’s tank. What Sophie does when the little girl takes a tumble (spoiler: the girl is OK) is even better:

“How sweet is our sea lion Sophie? She and a little girl were playing a game of tag when the little girl fell down. Like any good playmate, Sophie stopped in the middle of her game to make sure her new friend was OK,” read the National Zoo’s Facebook post about this encounter.

Reichmuth tells HuffPost she’d like for these sorts of interactions to lead to more human concern for the marine mammals, as well.

“Hopefully this family will remember this little sea lion,” she says, “when it comes down to things like accumulating and disposing trash, conserving energy, purchasing unnecessary plastic goods and packaging, caring about watersheds, supporting regulations that support clean air and clean water and more.”