A Brain Injury Turned A Regular Guy Into A Mathematical Genius..

Science and Technology
By Staff Contributor
May 9, 2014 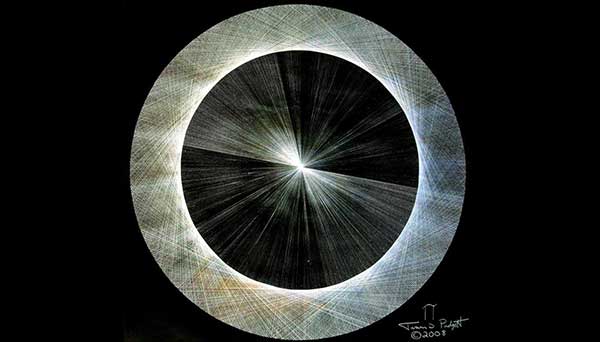 Jason likes drawing circles made up of increasingly many triangles, what he refers to as an illustration of pi.

In 2002, two men savagely attacked Jason Padgett outside a karaoke bar, leaving him with a severe concussion and post-traumatic stress disorder. But the incident also turned Padgett into a mathematical genius who sees the world through the lens of geometry.

Padgett, a furniture salesman from Tacoma, Washington, who had very little interest in academics, developed the ability to visualize complex mathematical objects and physics concepts intuitively. The injury, while devastating, seems to have unlocked part of his brain that makes everything in his world appear to have a mathematical structure.

“I see shapes and angles everywhere in real life” — from the geometry of a rainbow, to the fractals in water spiraling down a drain, Padgett told Live Science. “It’s just really beautiful.”

Padgett, who just published a memoir with Maureen Seaberg called “Struck by Genius” (Houghton Mifflin Harcourt, 2014), is one of a rare set of individuals with acquired savant syndrome, in which a normal person develops prodigious abilities after a severe injury or disease. Other people have developed remarkable musical or artistic abilities, but few people have acquired mathematical faculties like Padgett’s.

Now, researchers have figured out which parts of the man’s brain were rejiggered to allow for such savant skills, and the findings suggest such skills may lie dormant in all human brains.

Before the injury, Padgett was a self-described jock and partyer. He hadn’t progressed beyond than pre-algebra in his math studies. “I cheated on everything, and I never cracked a book,” he said.

But all that would change the night of his attack. Padgett recalls being knocked out for a split second and seeing a bright flash of light. Two guys started beating him, kicking him in the head as he tried to fight back. Later that night, doctors diagnosed Padgett with a severe concussion and a bleeding kidney, and sent him home with pain medications, he said.

Soon after the attack, Padgett suffered from PTSD and debilitating social anxiety. But at the same time, he noticed that everything looked different. He describes his vision as “discrete picture frames with a line connecting them, but still at real speed.” If you think of vision as the brain taking pictures all the time and smoothing them into a video, it’s as though Padgett sees the frames without the smoothing. In addition, “everything has a pixilated look,” he said.

With Padgett’s new vision came an astounding mathematical drawing ability. He started sketching circles made of overlapping triangles, which helped him understand the concept of pi, the ratio of a circle’s circumference to its diameter. There’s no such thing as a perfect circle, he said, which he knows because he can always see the edges of a polygon that approximates the circle.

Padgett dislikes the concept of infinity, because he sees every shape as a finite construction of smaller and smaller units that approach what physicists refer to as the Planck length, thought to be the shortest measurable length.

After his injury, Padgett was drawing complex geometric shapes, but he didn’t have the formal training to understand the equations they represented. One day, a physicist spotted him making these drawings in a mall, and urged him to pursue mathematical training. Now Padgett is a sophomore in college and an aspiring number theorist.

Padgett’s remarkable abilities garnered the interest of neuroscientists who wanted to understand how he developed them.

Berit Brogaard, a philosophy professor now at the University of Miami, in Coral Gables, Florida, and her colleagues scanned Padgett’s brain with functional magnetic resonance imaging (fMRI) to understand how he acquired his savant skills and the synesthesia that allows him to perceive mathematical formulas as geometric figures. (Synesthesia is a phenomenon in which one sense bleeds into another.)

“Acquired savant syndrome is very rare,” Brogaard said, adding that only 15 to 25 cases have ever been described in medical studies.

Functional magnetic resonance imaging measures changes in blood flow and oxygen use throughout the brain. During scans of Padgett, the researchers showed the man real and nonsense mathematical formulas meant to conjure images in his mind.

The resulting scans showed significant activity in the left hemisphere of Padgett’s brain, where mathematical skills have been shown to reside. His brain lit up most strongly in the left parietal cortex, an area behind the crown of the head that is known to integrate information from different senses. There was also some activation in parts of his temporal lobe (involved in visual memory, sensory processing and emotion) and frontal lobe (involved in executive function, planning and attention).

But the fMRI only showed what areas were active in Padgett’s brain. In order to show these particular areas were causing the man’s synesthesia, Brogaard’s team used transcranial magnetic stimulation (TMS), which involves zapping the brain with a magnetic pulse that activates or inhibits a specific region. When they zapped the parts of Padgett’s parietal cortex that had shown the greatest activity in the fMRI scans, it made his synesthesia fade or disappear, according to a study published in August 2013 in the journal Neurocase.

Brogaard showed, in another study, that when neurons die, they release brain-signaling chemicals that can increase brain activity in surrounding areas. The increased activity usually fades over time, but sometimes it results in structural changes that can cause brain-activity modifications to persist, Brogaard told Live Science.

Scientists don’t know whether the changes in Padgett’s brain are permanent, but if he had structural changes, it’s more likely his abilities are here to stay, Brogaard said.

The savant in everyone

So do abilities like Padgett’s lie dormant in everyone, waiting to be uncovered? Or was there something unique about Padgett’s brain to begin with?

Most likely, there is something dormant in everyone that Padgett tapped into, Brogaard said. “It would be quite a coincidence if he were to have that particular special brain and then have an injury,” she said. “And he’s not the only [acquired savant].”

In addition to head injuries, mental disease has also been known to reveal latent abilities. And Brogaard and others have done studies that suggest zapping the brains of normal people using TMS can temporarily bring out unusual mathematical and artistic skills.

It’s always possible that having savant skills may come with trade-offs. In Padgett’s case, he developed fairly severe post-traumatic stress disorder and obsessive-compulsive disorder, and he still finds it difficult to appear in public.

Yet Padgett wouldn’t change his new abilities if he could. “It’s so good, I can’t even describe it,” he said.

Previous articleMy son !
Next articleNestle CEO: Water Is Not A Human Right, Should Be Privatized
Digital Media