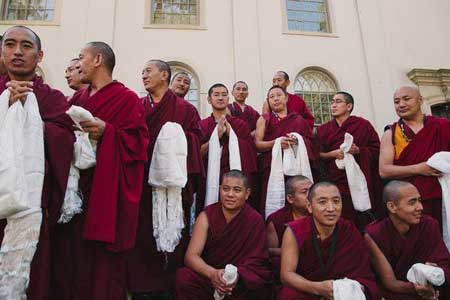 ATLANTA — Quantum theory tells us that the world is a product of an infinite number of random events. Buddhism teaches us that nothing happens without a cause, trapping the universe in an unending karmic cycle.

The Dalai Lama has started a project to translate science textbooks for use in monasteries. He hopes to meld the interior world of meditation with the exterior world of matter. 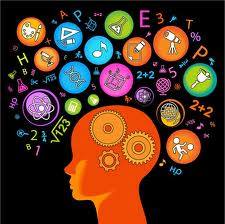 The Dalai Lama greeted monks in Atlanta this week. As part of the science project, 2,500 new terms have been coined in Tibetan. Reconciling the two might seem as challenging as trying to explain the Higgs boson to a kindergarten class. But if someone has to do it, it might as well be the team of scholars, translators and six Tibetan monks clad in maroon robes who can be spied wandering among the magnolias at Emory University here.

They were joined this week by the Dalai Lama, the spiritual leader of the Tibetan people, who decided seven years ago that it was time to merge the hard science of the laboratory with the soft science of the meditative mind. The leaders at Emory, who already had created formal relationships with Tibetan students there, agreed, and a unique partnership was formed.

For the monks, some of the challenges have been mundane, like learning to like pizza and trying to understand Lord Dooley, the university’s skeleton mascot.For the team of professors involved in the project, the Emory-Tibet Science Initiative, there are the larger issues, like how to develop methods to quantify the power of meditation in a way the scientific world might actually accept. But for the Dalai Lama, an energetic 78-year-old who rises at 3:30 every morning for four hours of meditation, his pet project is kind of a no-brainer.

Buddhist teaching offers education about the mind, he said in an interview after lunch Thursday at the home of James W. Wagner, the university president. “It is quite rich material about what I call the inner world,” he said. “Modern science is very highly developed in matters concerning the material world. These two things separately are not complete. Together, the external and the internal worlds are complete.”

The first batch of six monks, who arrived on campus on 2010, have gone back to India, where much of the Tibetan exile community lives, and started teaching. Dozens of monks and nuns have taken lectures from Emory professors who traveled to Dharamsala, India, to instruct them, and 15 English-Tibetan science textbooks have been developed for monastic students. The university pays about $700,000 a year for the program, which includes tuition for the monks, who then go back and teach science in the monasteries.

It has not been a smooth road. It took until last year for Buddhist leaders to accept science education as a mandatory part of monastic education. It was the first major change in 600 years. But as anyone who has tried to carry out an idea from the boss knows, the real work is in the details. Many of the toughest battles have come down to seemingly simple but vexing issues of lexicon. How does one create new words for concepts like photosynthesis and clones, which have no equivalent in the Tibetan language or culture? How does one begin to name thousands of molecules and chemical compounds? And what of words like process, which have several levels of meaning for Tibetans?

So far, 2,500 new scientific terms have been added to the Tibetan language. “Much of our work is to make new phrases novel enough so students won’t take them with literal meaning,” said Tsondue Samphel, who leads the team of translators. Still, some concepts are quite easy to translate.

“We understand impermanence of things as simply existing through our traditions,” said Jampa Khechok, 34, one of the new monks on campus. “We are now challenged to understand the nature of impermanence through the study of how fast particles decay.”

Learning has gone both ways. Professors here find themselves contemplating the science of the heart and mind in new ways. A student presenting a report on the cardiovascular system described the physiological reaction his own cardiovascular system might have if he were told the Tibetan people were free.

Debate is a constant, said Alexander Escobar of Emory, who has gone to India to teach biology. Monks have wanted to know, for example, how he could be so sure that seawater once covered the Himalayas. (The answer? Fossils.)

Western scholars have had to look at their work with a new lens, too, contemplating matters like the nature and origins of consciousness. One result has been the development of something called cognitively based compassion training, a secular mediation program proven to improve empathy. The partnership has had other, more practical applications.

Linda Hutton, a social worker, has a longstanding clinical practice treating sexually abused children and families in Greenville, S.C. She drove to Atlanta this week to attend a private luncheon with the Dalai Lama, who was making his sixth visit to Emory.

She teaches her young victims and their families to practice mindfulness and how to use meditation and breathing to cope with trauma.

“I draw from a lot of medical research,” she said, “but what I have found here transcends that.”