Buddha and the Bodhi tree

Others
By Staff Contributor
November 24, 2013 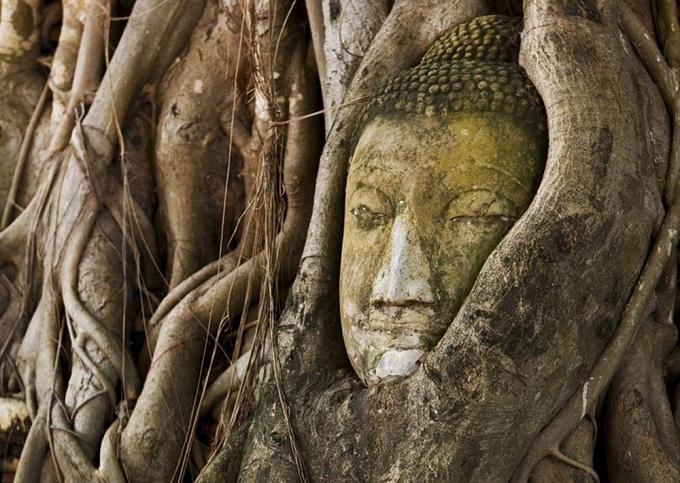 Lord Buddhas head overgrown in a Bodhi tree at Ayuthaya, a Unesco World Heritage Site containing the ruins of buildings destroyed in 1767 by the invading Burmese army.

Buddha statue and the Bodhi tree are entwined together in a story that has echoed down through the centuries, both wrapped around each other, forever joined.

Carved from sandstone and looking as serene and happy as any Buddha image you’ve ever seen, it’s one of the enduring images of not only Thailand but of Buddhism itself.

The construction of Wat Maha That was started by King Phra Borom Rajathirat in 1374.  In 1767, the Burmese army defeated the Ayutthayian army and this temple was burned.  Dozens of Buddha statues within the temple were beheaded.  Conjecture might be that one of the heads ended up next to the Bodhi tree that, after years of growth, claimed the Buddha head as its own.

It is written that Buddha attained enlightenment while sitting under a Bodhi tree at Bodh Gaya, India around 595 BC.  During the centuries after Buddha, the Bodhi tree became a symbol of the Buddha’s presence and an object of worship.

The original Bodhi tree at Bodh Gaya was also destroyed by King Puspyamitra during his persecution of Buddhism in the 2nd century BC.  Subsequently, over time, several new Bodhi trees have been replanted in the same location as the original.

It is no wonder that this unique image in Wat Maha That holds such a strong sacred presents within the Buddhist community today.