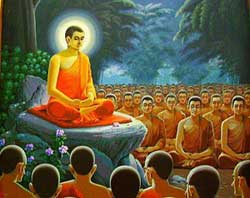 One day, whilst sitting under a great, spreading, Bo tree Siddhartha Gautama felt that he was somehow undergoing profound, and extensive, alterations of realization and awakening. Siddhartha remained for seven days under the great tree. It is from this times that Siddhartha began to be referred to as the Buddha, a name implying his being Awake and Enlightened. These few day’s spent under the Bo tree are considered to have been the time of his Enlightenment.

Buddha is said to have “attained Nirvana” – to have achieved a state where suffering is eliminated through the abandonment of desires – desires being the cause of suffering. Such attainmentment is held to bring release from an otherwise endless succession of reincarnations or rebirths. The term Nirvana has suggestive associations with a verb indicating cooling, or possibly, extinguishment!!!

Considering himself to have made significant Spiritual Progress and that he now had some Buddha teachings that he thought important to share with others Siddhartha journeyed on foot over one hundred miles to Benares.

Buddha’s Enlightenment was experienced whilst living a life that was neither overly luxurious nor overly austere. His teachings were subsequently framed against an idea of a “Middle Way” that avoided such extremes. In a deer park he delivered the celebrated “The Sermon at Benares” in which are included two of the more central Buddha teachings i.e. the “Four Noble Truths” and the “Noble Eightfold Path”. 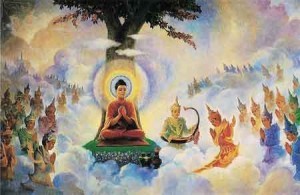 The First Noble Truth is that old age, illness, and death are all forms of human suffering, and that there are many other ways in which people suffer. The Buddha accepted the Vedic idea of endlessly successive reincarnations where life followed upon life, with much suffering inevitably attending in each of these lives. The idea of Karma further suggesting that in each existence a person’s good or bad deeds would respectively impact positively or negatively on their store of “merit”. It was this Karma-merit that would underpin the advantageous, or pitiful, state into which individual reincarnations would occur.

The Second Noble Truth is that suffering is closely linked to desire, a desire for being which leads from birth to death and involve ageing, illness, and mortality. There are also various desires for pleasures and for powers which, frustratingly, may not be realized.

The Third Noble Truth is that suffering can be dispelled by the abandonment of all desires.

Siddhartha Gautama’s Buddha teachings were to provide the basis for the establishment of Buddhism as a most significant religious and philosophical movement – in India for more than a thousand years – with Buddhism also spreading widely into other parts of the world.

Previous articleWhere’s the best place to be a women?
Next article790 Rhinos Poached This Year in South Africa
Digital Media