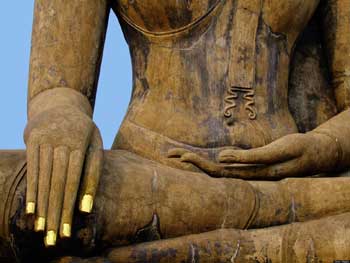 We brought you the amazing story of Cindy Bird becoming a Buddhist. Today we bring you another article of hers that we sighted from huff post. Enjoy and feel free to express your opinion here.

Even if you don’t know it by that name, everyone has seen the Touching the Earth Mudra. Buddha, sitting with one hand raised to show he’s teaching, the other reaching down to touch the Earth below. It represents the moment that Buddha finally defeated all the snares of Mara and gained Enlightenment. Mara, the Tempter, asks who will stand as witness to his right to gain Enlightenment. Buddha reaches down and touches the Earth as he says, “The Earth is my witness.”

But what does that mean to us, 2,500 years removed from that act? It teaches us an important lesson about time. “Time?” You might ask, “How does that say anything about time?” 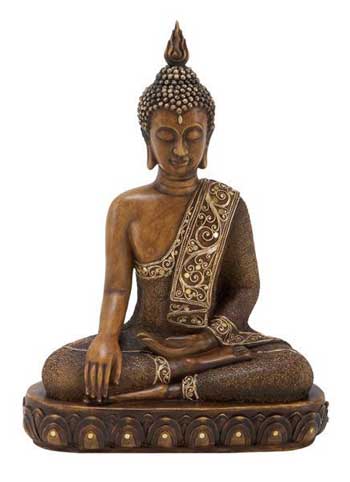 Not in the literal sense, of course. But from a practical viewpoint, time had effectively stopped. Because Buddha never again obsessed over the past, or feared what the future might bring. He didn’t worry about yesterday or tomorrow. He simply existed outside of the flow of time: Past or future.

With that one act, he found the timelessness inside of time. He found that true time is only to be found in THIS moment. Not tomorrow, not yesterday, not this morning, but right now. There IS no time if you live in the moment, going from moment to moment to moment, accepting what is and what is not. Simply saying to yourself, “This moment will never exist again. I will savor and capture it fully. I will experience it fully, right now, before it escapes.”

This is the true secret of time. That it really is only an imagined thing based on light and our own fears and regrets. When we were children, there was no time. We had endless days to play and endless nights to savor the stars and moon. It is only when we think we have grown out of that, that we realize that that way of looking at time is the only way to survive it.

We say, “Time marches on.” With that one act of touching the Earth, Buddha stopped the march with a single gesture. He taught us to look for the timelessness within time. To stop, not to smell the roses, but to save ourselves. To stop the endless march toward an unknown future somewhere out there. To stop running from past regrets. In the end, to just stop. Because this moment of timelessness is all we ever really have. Just this moment. No other. Just this one timeless moment which includes everything.