We found many appreciating our article on “What is Buddhism”. There were few requests as well

add comments and ask question related to the article.

On the fullmoon day of May, in the year 623 B.C., there was born in the district of Nepal an Indian Sakya Prince named Siddhattha Gotama, who was destined to be the greatest religious teacher in the world. Brought up in the lap of luxury, receiving an education befitting a prince, he married and had a son.

His contemplative nature and boundless compassion did not permit him to enjoy the fleeting material pleasures of a Royal household. He knew no woe, but he felt a deep pity for sorrowing humanity. Amidst comfort and prosperity, he realized the universality of sorrow. The palace, with all its worldly amusements, was no longer a congenial place for the compassionate prince. The time was ripe for him to depart. Realizing the vanity of sensual enjoyments, in his twenty-ninth year, he renounced all worldly pleasures and donning the simple yellow garb of an ascetic, alone, penniless, wandered forth in search of Truth and Peace.

It was an unprecedented historic renunciation; for he renounced not in his old age but in the prime of manhood, not in poverty but in plenty. As it was the belief in the ancient days that no deliverance could be gained unless one leads a life of strict asceticism, he strenuously practiced all forms of severe austerities. “Adding vigil after vigil, and penance after penance,” he made a superhuman effort for six long years. 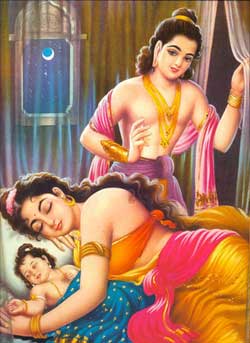 His body was reduced to almost a skeleton. The more he tormented his body, the farther his goal receded from him. The painful, unsuccessful austerities which he strenuously practiced proved absolutely futile. He was now fully convinced, through personal experience, of the utter futility of self-mortification which weakened his body and resulted in lassitude of spirit.

Benefiting by this invaluable experience of his, he finally decided to follow an independent course, avoiding the two extremes of self-indulgence and self-mortification. The former retards one’s spiritual progress, and the latter weakens one’s intellect. The new way which he himself discovered was the Middle Path, Majjhima Patipada, which subsequently became one of the salient characteristics of his teaching.

One happy morning, while He was deeply absorbed in meditation, unaided and unguided by any supernatural power and solely relying on His efforts and wisdom, He eradicated all defilements, purified Himself, and, realizing things as they truly are, attained Enlightenment (Buddhahood) at the age of 35. He was not born a Buddha, [*] but He became a Buddha by His own striving. As the perfect embodiment of all the virtues He preached, endowed with deep wisdom commensurate with His boundless compassion. He devoted the remainder of His precious life to serve humanity both by example and precept, dominated by no personal motive whatever.

* [An Awakened or Enlightened One.]

After a very successful ministry of 45 long years the Buddha, as every other human being, succumbed to the inexorable law of change, and finally passed away in His 80th year, exhorting His disciples to regard His doctrine as their teacher. 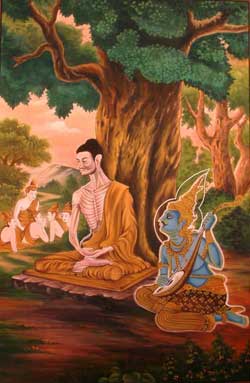 The Buddha was a human being. As a man He was born, as a man He lived, and as a man His life came to an end. Though a human being, He became an extraordinary man (Acchariya Manussa), but He never arrogated to Himself divinity. The Buddha laid stress on this important point and left no room whatever for anyone to fall into the error of thinking that He was an immortal divine being. Fortunately there is no deification in the case of the Buddha. It should, however, be remarked that there was no Teacher, “ever so godless as the Buddha, yet none so god-like.”

The Buddha is neither an incarnation of the Hindu God Vishnu, as is believed by some, nor is He a savior who freely saves others by His personal salvation. The Buddha exhorts His disciples to depend on themselves for their deliverance, for both purity and defilement depend on oneself. Clarifying His relationship with His followers and emphasizing the importance of self-reliance and individual striving, the Buddha plainly states: “You should exert yourselves, the Tathagatas [*] are only teachers.”

The Buddhas point out the path, and it is left for us to follow that path to obtain our purification.

“To depend on others for salvation is negative, but to depend on oneself is positive.” Dependence on others means a surrender of one’s effort.