Buddhism in a nutshell (Part-2) 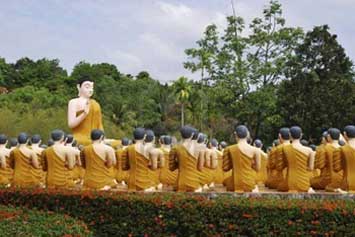 In exhorting His disciples to be self-dependent the Buddha says in the Parinibbana Sutta: “Be ye islands unto yourselves, be ye a refuge unto yourselves, seek not for refuge in others.” These significant words are self-elevating. They reveal how vital is self-exertion to accomplish one’s object and, how superficial and futile it is to seek redemption through benignant saviors and to crave for illusory happiness in an after life through the propitiation of imaginary Gods or by irresponsive prayers and meaningless sacrifices.

Furthermore, the Buddha does not claim the monopoly of Buddhahood which, as a matter of fact, is not the prerogative of any specially graced person. He reached the highest possible state of perfection any person could aspire to, and without the close-fist of a teacher he revealed the only straight path that leads thereto. According to the Teaching of the Buddha anybody may aspire to that supreme state of perfection if he makes the necessary exertion. The Buddha does not condemn men by calling they wretched sinners, but, on the contrary, He gladdens them by saying that they are pure in heart at conception. In His opinion the world is not wicked but is deluded by ignorance. Instead of disheartening His followers and reserving that exalted state only to Himself, He encourages and induces them to emulate Him, for Buddhahood is latent in all. In one sense all are potential Buddhas.

One who aspires to become a Buddha is called a Bodhisatta, which, literally, means a wisdom-being. This Bodhisatta ideal is the most beautiful and the most refined course of life that has ever been presented to this ego-centric world, for what is nobler than a life of service and purity?

As a Man He attained Buddhahood and proclaimed to the world the latent inconceivable possibilities and the creative power of man. Instead of placing an unseen Almighty God over man who arbitrarily controls the destinies of mankind, and making him subservient to a supreme power, He raised the worth of mankind. It was He who taught that man can gain his deliverance and purification by his own exertion without depending on an external God or mediating priests. It was he who taught the ego-centric world the noble ideal of selfless service. It was He who revolted against the degrading caste system and taught equality of mankind and gave equal opportunities for all to distinguish themselves in every walk of life.

He declared that the gates of success and prosperity were open to all in every condition of life, high or low, saint or criminal, who would care to turn a new leaf and aspire to perfection.

Irrespective of caste, color or rank He established for both deserving men and women a democratically constituted celibate Order. He did not force His followers to be slaves either to His Teachings or to Himself but granted complete freedom of thought.

He comforted the bereaved by His consoling words. He ministered to the sick that were deserted. He helped the poor that were neglected. He ennobled the lives of the deluded, purified the corrupted lives of criminals. He encouraged the feeble, united the divided, enlightened the ignorant, clarified the mystic, guided the benighted, elevated the base, dignified the noble. Both rich and poor, saints and criminals loved Him alike. Despotic and righteous kings, famous and obscure princes and nobles, generous and stingy millionaires, haughty and humble scholars, destitute paupers, down-trodden scavengers, wicked murderers, despised courtesans — all benefited by His words of wisdom and compassion.

His noble example was a source of inspiration to all. His serene and peaceful countenance was a soothing sight to the pious eyes. His message of Peace and Tolerance was welcomed by all with indescribable joy and was of eternal benefit to every one who had the fortune to hear and practice it.

Wherever His teachings penetrated it left an indelible impression upon the character of the respective peoples. The cultural advancement of all the Buddhist nations was mainly due to His sublime Teachings. In fact all Buddhist countries like Ceylon, Burma, Thailand, Cambodia, Vietnam, Laos, Nepal, Tibet, China, Mongolia, Korea, Japan, etc., grew up in the cradle of Buddhism. Though more than 2500 years have elapsed since the passing away of this greatest Teacher, yet his unique personality exerts a great influence on all who come to know Him.

His iron will, profound wisdom, universal love, boundless compassion, selfless service, historic renunciation, perfect purity, magnetic personality, exemplary methods employed to propagate the Teachings, and his final success — all these factors have compelled about one-fifth of the population of the world today to hail the Buddha as their supreme Teacher.

Paying a glowing tribute to the Buddha Sri Radhakrishnan states: “In Gautama the Buddha we have a master-mind from the East second to none so far as the influence on the thought and life of the human race is concerned, and, sacred to all as the founder of a religious tradition whose hold is hardly less wide and deep than any other. He belongs to the history of the world’s thought, to the general inheritance of all cultivated men, for, judged by intellectual integrity, moral earnestness, and spiritual insight, He is undoubtedly one of the greatest figures in history.

In The Three Greatest Men in History, H.G. Wells writes: “In the Buddha you see clearly a man, simple, devout, lonely, battling for light — a vivid human personality, not a myth. He too gave a message to mankind universal in character. Many of our best modern ideas are in closest harmony with it. All the miseries and discontents are due, he taught, to selfishness. Before a man can become serene he must cease to live for his senses or himself. Then he merges into a great being. Buddha in different language called men to self-forgetfulness 500 years before Christ. In some ways he is nearer to us and our needs. He was more lucid upon our individual importance and service than Christ and less ambiguous upon the question of personal immortality.”

St. Hilaire remarks “The perfect model of all the virtues He preaches. His life has not a stain upon it.”

Fausboll says — “The more I know of Him, the more I love Him.”