THE DHAMMA: Is it a Philosophy? 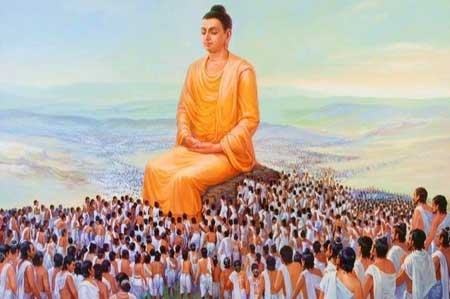 The non-aggressive, moral and philosophical system expounded by the Buddha, which demands no blind faith from its adherents, expounds no dogmatic creeds, encourages no superstitious rites and ceremonies, but advocates a golden mean that guides a disciple through pure living and pure thinking to the gain of supreme wisdom and deliverance from all evil, is called the Dhamma and is popularly known as Buddhism.

The all-merciful Buddha has passed away, but the sublime Dhamma which He unreservedly bequeathed to humanity, still exists in its pristine purity. Although the Master has left no written records of His Teachings, His distinguished disciples preserved them by committing to memory and transmitting them orally from generation to generation.

Immediately after His demise 500 chief Arahats [*] versed in the Dhamma [**] and Vinaya, [***] held a convocation to rehearse the Doctrine as was originally taught by the Buddha. Venerable Ananda Thera, who enjoyed the special privilege of hearing all the discourses, recited the Dhamma, while the Venerable Upali recited the Vinaya.

* [Literally, the Worthy Ones. They are the enlightened disciples who have destroyed all passions.] ** [The Teaching.] *** [The Discipline.]

The Tipitaka was compiled and arranged in its present form by those Arahats of old. 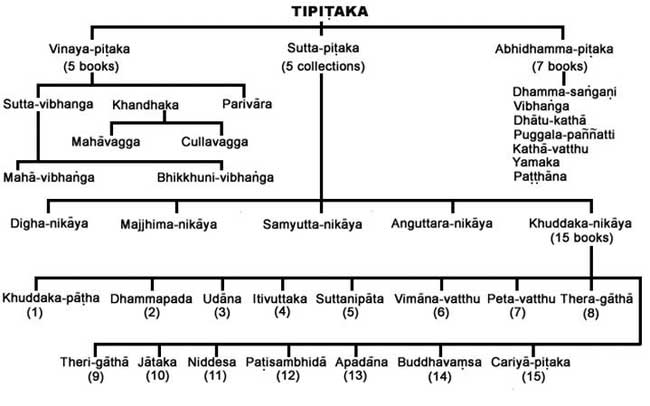 During the reign of the pious Sinhala King Vattagamani Abhaya, about 83 B.C., the Tipitaka was, for the first time in the history of Buddhism, committed to writing on palm leaves (ola) in Ceylon.

This voluminous Tipitaka, which contains the essence of the Buddha’s Teaching, is estimated to be about eleven times the size of the Bible. A striking contrast between the Tipitaka and the Bible is that the former is not a gradual development like the latter.

The Vinaya Pitaka which is regarded as the sheet anchor to the oldest historic celibate order — the Sangha — mainly deals with rules and regulations which the Buddha promulgated, as occasion arose, for the future discipline of the Order of monks (Bhikkhus) and nuns (Bhikkunis). It described in detail the gradual development of the Sasana (Dispensation). An account of the life and ministry of the Buddha is also given. Indirectly it reveals some important and interesting information about ancient history, Indian customs, arts, science, etc.

The Vinaya Pitaka consists of the five following books:

The Sutta Pitaka consists chiefly of discourses, delivered by the Buddha himself on various occasions. There are also a few discourses delivered by some of His distinguished disciples such as the Venerable Sariputta, Ananda, Moggallana, etc., included in it. It is like a book of prescriptions, as the sermons embodied therein were expounded to suit the different occasions and the temperaments of various persons. There may be seemingly contradictory statements, but they should not be misconstrued as they were opportunely uttered by the Buddha to suit a particular purpose: for instance, to the self-same question He would maintain silence (when the inquirer is merely foolishly inquisitive), or give a detailed reply when He knew the inquirer to be an earnest seeker. Most of the sermons were intended mainly for the benefit of Bhikkhus and they deal with the Holy life and with the expositions of the doctrine. There are also several other discourses which deal with both the material and moral progress of His lay followers.

This Pitaka is divided into five Nikayas or collections, viz:

The fifth is subdivided into fifteen books:

The Abhidhamma Pitaka is the most important and the most interesting of the three, containing as it does the profound philosophy of the Buddha’s Teaching in contrast to the illuminating and simpler discourses in the Sutta Pitaka.

To the wise, Abhidhamma is an indispensable guide; to the spiritually evolved, an intellectual treat; and to research scholars, food for thought. Consciousness is defined. Thoughts are analyzed and classified chiefly from an ethical standpoint. Mental states are enumerated. The composition of each type of consciousness is set forth in detail. How thoughts arise, is minutely described. Irrelevant problems that interest mankind but having no relation to one’s purification, are deliberately set aside.

Matter is summarily discussed; fundamental units of matter, properties of matter, sources of matter, relationship between mind and matter, are explained.

The Abhidhamma investigates mind and matter, the two composite factors of the so-called being, to help the understanding of things as they truly are, and a philosophy has been developed on those lines. Based on that philosophy, an ethical system has been evolved, to realize the ultimate goal, Nibbana.

In the Tipitaka one finds milk for the babe and meat for the strong, for the Buddha taught His doctrine both to the masses and to the intelligentsia. The sublime Dhamma enshrined in these sacred texts, deals with truths and facts, and is not concerned with theories and philosophies which may be accepted as profound truths today only to be thrown overboard tomorrow. The Buddha has presented us with no new astounding philosophical theories, nor did He venture to create any new material science. He explained to us what is within and without so far as it concerns our emancipation, as ultimately expounded a path of deliverance, which is unique. Incidentally, He has, however, forestalled many a modern scientist and philosopher.

Schopenhauer in his “World as Will and Idea” has presented the truth of suffering and its cause in a Western garb. Spinoza, though he denies not the existence of a permanent reality, asserts that all phenomenal existence is transitory. In his opinion sorrow is conquered “by finding an object of knowledge which is not transient, not ephemeral, but is immutable, permanent, everlasting.” Berkeley proved that the so-called indivisible atom is a metaphysical fiction. Hume, after a relentless analysis of the mind, concluded that consciousness consists of fleeting mental states. Bergson advocates the doctrine of change. Prof. James refers to a stream of consciousness. The Buddha expounded these doctrines of Transiency (Anicca), Sorrow (Dukkha), and No-Soul (Anatta) some 2500 years ago while He was sojourning in the valley of the Ganges.

He taught what He deemed was absolutely essential for one’s purification making no distinction between an esoteric and exoteric doctrine. He was characteristically silent on questions irrelevant to His noble mission. Buddhism no doubt accords with science, but both should be treated as parallel teachings, since one deals mainly with material truths while the other confines itself to moral and spiritual truths. The subject matter of each is different.

The Dhamma He taught is not merely to be preserved in books, nor is it a subject to be studied from an historical or literary standpoint. On the contrary it is to be learnt and put into practice in the course of one’s daily life, for without practice one cannot appreciate the truth. The Dhamma is to be studied, and more to be practiced, and above all to be realized; immediate realization is its ultimate goal. As such the Dhamma is compared to a raft which is meant for the sole purpose of escaping from the ocean of birth and death (Samsara).

Buddhism, therefore, cannot strictly be called a mere philosophy because it is not merely the “love of, inducing the search after, wisdom.” Buddhism may approximate a philosophy, but it is very much more comprehensive.

Philosophy deals mainly with knowledge and is not concerned with practice; whereas Buddhism lays special emphasis on practice and realization.