Is it a Religion? 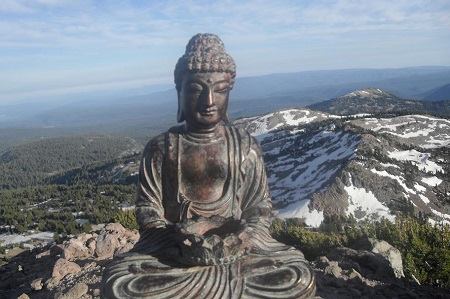 It is neither a religion in the sense in which that word is commonly understood, for it is not “a system of faith and worship owing any allegiance to a supernatural being.”

Buddhism does not demand blind faith from its adherents. Here mere belief is dethroned and is substituted by confidence based on knowledge, which, in Pali, is known as Saddha. The confidence placed by a follower on the Buddha is like that of a sick person in a noted physician, or a student in his teacher. A Buddhist seeks refuge in the Buddha because it was He who discovered the Path of Deliverance.

A Buddhist does not seek refuge in the Buddha with the hope that he will be saved by His personal purification. The Buddha gives no such guarantee. It is not within the power of a Buddha to wash away the impurities of others. One could neither purify nor defile another.

The Buddha, as Teacher, instructs us, but we ourselves are directly responsible for our purification.

Although a Buddhist seeks refuge in the Buddha, he does not make any self-surrender. Nor does a Buddhist sacrifice his freedom of thought by becoming a follower of the Buddha. He can exercise his own free will and develop his knowledge even to the extent of becoming a Buddha himself.

The starting point of Buddhism is reasoning or understanding, or, in other words, Samma-ditthi.

To the seekers of truth the Buddha says:

These inspiring words of the Buddha still retain their original force and freshness.

Though there is no blind faith, one might argue whether there is no worshiping of images etc., in Buddhism.

Buddhists do not worship an image expecting worldly or spiritual favors, but pay their reverence to what it represents.

An understanding Buddhist, in offering flowers and incense to an image, designedly makes himself feel that he is in the presence of the living Buddha and thereby gains inspiration from His noble personality and breathes deep His boundless compassion. He tries to follow His noble example.

The Bo-tree is also a symbol of Enlightenment. These external objects of reverence are not absolutely necessary, but they are useful as they tend to concentrate one’s attention. An intellectual person could dispense with them as he could easily focus his attention and visualize the Buddha.

For our own good, and out of gratitude, we pay such external respect but what the Buddha expects from His disciple is not so much obeisance as the actual observance of His Teachings. The Buddha says — “He honors me best who practices my teaching best.” “He who sees the Dhamma sees me.”

With regard to images, however, Count Kevserling remarks — “I see nothing more grand in this world than the image of the Buddha. It is an absolutely perfect embodiment of spirituality in the visible domain.”

Furthermore, it must be mentioned that there are not petitional or intercessory prayers in Buddhism. However much we may pray to the Buddha we cannot be saved. The Buddha does not grant favors to those who pray to Him. Instead of petitional prayers there is meditation that leads to self-control, purification and enlightenment. Meditation is neither a silent reverie nor keeping the mind blank. It is an active striving. It serves as a tonic both to the heart and the mind. The Buddha not only speaks of the futility of offering prayers but also disparages a slave mentality. A Buddhist should not pray to be saved, but should rely on himself and win his freedom.

“Prayers take the character of private communications, selfish bargaining with God. It seeks for objects of earthly ambitions and inflames the sense of self. Meditation on the other hand is self-change.”

In Buddhism there is not, as in most other religions, an Almighty God to be obeyed and feared. The Buddha does not believe in a cosmic potentate, omniscient and omnipresent. In Buddhism there are no divine revelations or divine messengers. A Buddhist is, therefore, not subservient to any higher supernatural power which controls his destinies and which arbitrarily rewards and punishes. Since Buddhists do not believe in revelations of a divine being Buddhism does not claim the monopoly of truth and does not condemn any other religion. But Buddhism recognizes the infinite latent possibilities of man and teaches that man can gain deliverance from suffering by his own efforts independent of divine help or mediating priests.

Buddhism cannot, therefore, strictly be called a religion because it is neither a system of faith and worship, nor “the outward act or form by which men indicate their recognition of the existence of a God or gods having power over their own destiny to whom obedience, service, and honor are due.”

If, by religion, is meant “a teaching which takes a view of life that is more than superficial, a teaching which looks into life and not merely at it, a teaching which furnishes men with a guide to conduct that is in accord with this its in-look, a teaching which enables those who give it heed to face life with fortitude and death with serenity,” or a system to get rid of the ills of life, then it is certainly a religion of religions.