Buddhism undoubtably the religion respects women the most

All over the world today we realize various types of discriminations against the women. Men dominated culture does hardly any justice to women in some parts of the world. Especially the Islam world is considered most dangerous for women with liberal ideologies.  In fact it’s hard to practice any liberal living in most Islam societies. Same way some other cultures around the world has various types of discriminations.

Let’s look at how Buddhism treats women in a series of articles starting today. We would like to look at various aspects such as historical, cultural, religious teachings based and modern day events. The first article we share with you today is a work by Venerable K. Sri Dhammananda Maha Thera. Enjoy our article series and remember to share it with your friends and family who would like to be a part of our valuable Buddhist community. 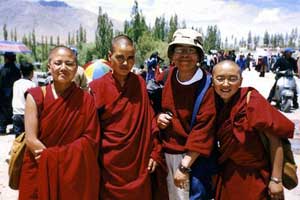 Women’s position in Buddhism is unique. The Buddha gave women full freedom to participate in a religious life. The Buddha was the first religious Teacher who gave this religious freedom to women. Before the Buddha, women’s duties had been restricted to the kitchen; women were not even allowed to enter any temple or to recite any religious scripture. During the Buddha’s time, women’s position in society was very low. The Buddha was criticized by the prevailing establishment when He gave this freedom to women. His move to allow women to enter the Holy Order was extremely radical for the times. Yet the Buddha allowed women to prove themselves and to show that they too had the capacity like men to attain the highest position in the religious way of life by attaining Arahantahood. Every woman in the world must be grateful to the Buddha for showing them the real religious way of living and for giving such freedom to them for the first time in world history. 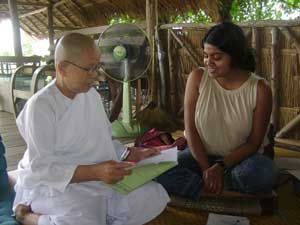 A good illustration of the prevailing attitude towards women during the Buddha’s time is found in these words of Mara: ‘No woman, with the two-finger wisdom (narrow) which is hers, could ever hope to reach those heights which are attained only by the sages.’

Undoubtedly, the Buddha was vehement in contradicting such attitude. The nun (bhikkhuni) to whom Mara addressed these words, gave the following reply: ‘When one’s mind is well concentrated and wisdom never fails, does the fact of being a woman make any difference?’ King Kosala was very disappointed when he heard that his Queen had given birth to a baby girl. He had expected a boy. To console the sad King, the Buddha said:

‘A female child, O Lord of men, may prove

Even a better offspring than a male.

For she may grow up wise and virtuous,

The boy that she may bear may do great deeds,

And rule great realms, yes, such a son

Nowadays many religionists like to claim that their religions give women equal rights. We only have to look at the world around us today to see the position of women in many societies. It seems that they have no property rights, are discriminated in various fields and generally suffer abuse in many subtle forms. Even in western countries, women like the Suffragettes had to fight very hard for their rights. According to Buddhism, it is not justifiable to regard women as inferior. The Buddha Himself was born as a woman on several occasions during His previous births in Samsara and even as a woman He developed the noble qualities and wisdom until He gained Enlightenment or Buddhahood.

Previous articleDo your thoughts and emotions control your happiness???
Next articleLOVE, is all you and I want
Digital Media