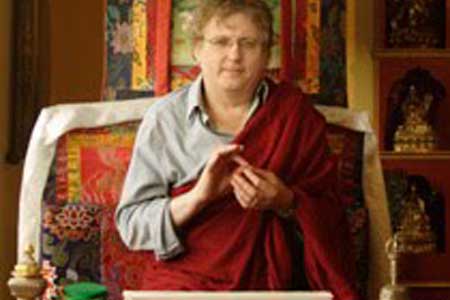 Will Western adaptation of the dharma challenge contemporary culture or accommodate it? – Lama Jampa Thaye

Something called “Buddhism” has certainly been growing in the Western world during the last few decades. Surveys on both sides of the Atlantic—the Pew Survey in the US and the recent census for England and Wales in the UK—indicate a rate of growth second only to Islam. Yet, I must admit, I felt a little uneasy about this picture of robust health. Mixing effortlessly into our culture, will Buddhism, a two-and-a-half-millennia-old system of philosophy and contemplative practice, be capable of challenging that culture? Will the resultant mixture be conducive to awakening? It was with such thoughts that I accepted the invitation from my friend Lama Surya Das to attend an informal gathering of dharma teachers held in New York City on November 18. The venue was the New York Insight Center, where we were warmly welcomed by resident teacher Gina Sharpe. The format was no format—a sharing of experiences, observations, and concerns. About 15 people drawn from such traditions as Theravada, Zen, and Vajrayana were present. Among them were well-known American teachers Jack Kornfield, Nancy Mujo Baker, Roshi Enkyo, Shinzen Young, and Tulku Sherdor.

It was a good day. Many topics came up, ranging from the impact of new technologies on spiritual life to the question of whether new forms of pedagogy would be required. Most of the discussion, however, circled around the seemingly competing demands of innovative adaptation versus preservation—sometimes explicitly, sometimes implicitly. At times the group seemed to divide into two parties corresponding to the weight given to each side of this semi-subterranean debate.

I was left wondering if I had caught a glimpse of the face of a new Buddhism slouching westward to be born. However, I wasn’t sure whether my Tibetan teachers would recognize it, or even whether it was the dharma at all. Hearing how some believe that Buddhism has no ethics, that science will likely be able to engineer enlightenment neurologically, and that the stages of the path toward (as well as the actual signs of) buddhahood were outdated myths, convinced me that things have changed—and not necessarily in a positive way—since I found the dharma back in the 60s. It also made me suspect that, if we so crave Buddhism with a Western face, we might end up with a Buddhism that is merely a mirror image of ourselves and our present culture, a hybrid of superannuated Protestantism and narcissism marketed by Spirituality Inc. for upscale liberals.

One might say the principal spiritual feature of Buddhism’s history up until now has been the transmission of a body of doctrines, contemplative methods, and organizational forms. While the exact constituents of this transmission vary somewhat from tradition to tradition, in Tibetan or Vajrayana Buddhism the key mechanism for transmission is the relationship between teacher and student, between the holder and the recipient of knowledge. It is through this nexus that initiations, transmissions, and oral instructions—the three principal forms of Vajrayana teachings, which we may define as a collection of methods designed to bring about a transformation of the psyche—are passed from one generation to the next. Such an emphasis on transmission from the master might lead one to conclude that a rigid conservatism or traditionalism must necessarily follow. But since the knowledge of the tradition—its repertoire of spiritual methods—is transmitted in a living form from person to person, the idea of a static, unchanging body of knowledge is mistaken.

One can see this illustrated in the lives of the early Kagyu and Sakya masters in medieval Tibet. As a link in the chain of transmission, each successive master had to re-create the teachings in the context of his or her own contemplative experience and personal and social circumstances. The first Tibetan in the nascent Kagyu tradition, Marpa, was a family man, gentleman farmer, and translator that had to assimilate the teachings of his masters Naropa and Maitripa. Their knowledge was drawn from a combination of the highly refined monastic university system of Buddhist India and the wildly unconventional customs of tantric yogins, two milieus worlds away from his own. There also persisted a striking difference between the lifestyles of the autocratic Marpa and his principal disciple Milarepa, a penitent sorcerer turned ascetic. Yet Milarepa, like Marpa, was able to utilize his master’s teachings to attain the pinnacle of spiritual achievement.

A similar pattern of fluid and responsive transmission is equally evident in the early Sakya tradition. The transmission from the lineage’s spiritual antecedents of Indian tantric yogins like Virupa through its first three masters in Tibet, lay practitioners all, reached its settled form with Sakya Pandita, who successfully blended the scholarly and the contemplative, the monastic and the tantric.

It’s instructive to reach back to these examples of earlier cross-cultural transmissions to guide us now in our not-so-dissimilar situation. Indeed, it cannot be mere coincidence that Sakya Pandita, in order to preserve the liberating force of the teachings, devoted much of his energies to disentangling 13th-century Buddhism from ungrounded and maladroit Tibetan adaptations. Educated by both his uncle Drakpa Gyaltsen and some of the last generation of Indian Buddhist masters, Sakya Pandita was able to subject contemporary Tibetan forms of Buddhism to a critical scrutiny that could discern those spurious adaptations that accorded neither with major textual and contemplative transmissions from India nor with reason. One can safely assume that a Buddhism stripped of ethics, one reduced to mere mindfulness, recast as materialism or one in which enlightenment becomes a fleeting psychological state, would not have passed Sakya Pandita’s test of acceptable innovation. Neither should they ours.

So, to return to the seemingly irreconcilable claims of adaptation and continuity that echoed through that gathering in Manhattan, maybe we do not need to choose one over the other in the development of Buddhism in the West. As we have seen, adaptation and continuity were both evident in the transmission of Buddhism from India to Tibet. The element of continuity endowed the new Tibetan schools with the resources and strengths accumulated by Indian Buddhism over one and a half millennia; yet, at the same time, the element of innovation endowed the traditions with flexibility to respond to their new cultural settings and, in effect, be reworked by masters who were both grounded in the central concerns of Indo-Tibetan Buddhism and subtle enough in their perceptions of Tibetan realities to present the traditions felicitously. Our first task, then, as practitioners who wish buddhadharma to prosper in the West, is to receive and master the inheritance of dharma. We have not yet done so, but we have made a start.

Thus, if the question is adaptation or continuity, the answer is both, just as it was in India and Tibet, so it has to be here, whether in Los Angeles or London, New York or Paris.