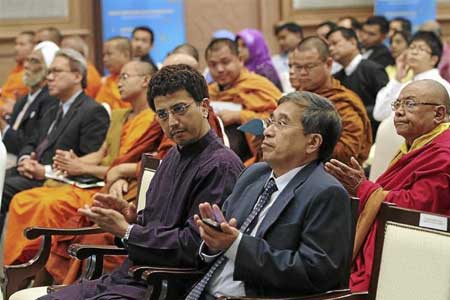 The chairman of the International Network of Engaged Buddhists (INEB), Dr Harsha Kumara Navaratne, from Sri Lanka, said isolation would happen if a country allowed religious and ethnic lines to worsen.

“The people in Sri Lanka live in separate areas, attend separate schools and speak separate languages. This isolation contributes to mistrust and fear,” he said, adding that other groups become abstract and were easily stereotyped.

Dr Harsha was speaking at the International Buddhist-Muslim Forum on Peace and Sustainability which was held at the Institute of Islamic Understanding Malaysia (Ikim) on Friday. The other speakers included Ikim director-general Datuk Nik Musta­pha Nik Hassan and International Movement for a Just World (JUST) secretary-general Anas Zubedy.

“If Buddhist and Muslim communities can overcome the challenges that confront them, there is tremendous potential for the growth and development of ideas and values that may help to transform the region,” said Dr Harsha.

Dr Chandra noted that in the South-East Asian region, Muslims and Buddhists made up 40% and 42% of the population, respectively. “If we allow violence to erode relations between followers of the faiths, it could destabilise peace in the region. Thus, we must come together to maintain relations,” he said.

The INEB conference has been held every two years since its inaugural gathering in Bangkok in 1989. The conference has since been hosted in countries such as India, South Korea, Sri Lanka and Taiwan.

This year’s conference also discussed the Buddhist and Muslim tensions that occurred in certain countries such as Thailand, Indonesia, Myanmar and Sri Lanka.