The Buddhist with Lynch syndrome 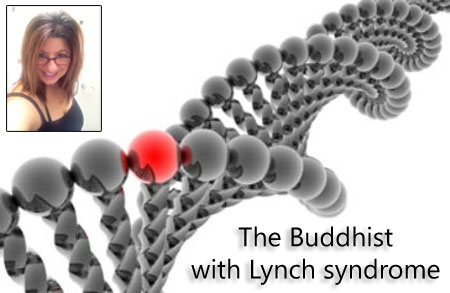 Georgia M. Hurst, a follower and a fan of BBN is the founder of ihavelynchsyndrome.com. This is her story that she would like to share with you. The story will not only educate you about the Lynch syndrome but also what a patient has to go through. Most importantly her piece of work will help you realize and look at various perspectives of life with the help of Buddhism to overcome any unfortunate situation of life. Read to see how Buddhism helped Georgia and share her story with those who can benefit from her experience.

I’ve been practicing Buddhism for over a decade. I was born into the Greek Orthodox religion and attended Catholic school but was never able to subscribe to Christian doctrine. I had difficulty believing in much of what was taught and stopped going to church when I became an adult. It was not until I went to college when I become comfortable with my views on religion. My education included a course on Asian religions and I found myself immediately drawn to Buddhist philosophy. Since then, I began meditating and reading a great deal on Buddhism; it makes sense to me and has helped put many of the my life’s challenges into context which in turn have given me tremendous perspective and meaning.

Over two years ago, I was diagnosed with Lynch syndrome; a horrifying genetic mutation which predisposes me to dozens of early onset different cancers. Those of us with Lynch syndrome are at risk for a dramatic increase for colon cancerand my brothers have both been afflicted; my oldest brother died at 36 and the otherat 48. Lynch syndromeenjoys manifesting itself first in the reproductive organs of women and so it was strongly recommended I have a hysterectomy and oophorectomy at 40. Little did I know that I would face my life’s greatest challenge after the surgery – forced menopause. I became very ill and did not have cancer and had to reconcile this elusive diagnosis, which made me feel like nothing but a walking time bomb.

Plummeting estrogen levels a couple months after my surgery caused me severe depression and sickness. Many people whom I had considered to be my friends abandoned me during my time of great need. There were very few people I could turn to for comfort and solace. I was repeatedly disappointed because I kept searching in the wrong places for what I needed. What I truly needed to do was to look inward and grasp my Inner Divinity to help me get through my challenges. My biggest emotional challenges consisted of accepting my mortality and reconciling my death anxiety. The Tibetan Book of the Living and the Dead drastically altered my perspective on death for the better. I began reading more Buddhist literature and meditating religiously; my Buddhist practice improved my life physically, emotionally, and mentally.

I truly believe that the past couple of hellacious years of my life have served a tremendous purpose. Whilst the diagnosis and forced menopause shook my physical core and shifted the hell out of my emotional tectonic plates, I feel that there was much to be learned, not only about myself, butabout others, and of life in general. My pool of empathy for others has dramatically deepened. Everyone has issues, of varying degrees, but nonetheless, issues. Most importantly, Buddhism has taught me to create something positive out of the negative. My older brother’s death, then my other brother’s colon cancer, and then my diagnosis could not be in vain. I had to figure out a way to come to terms with everything and channel my energy into something bigger than myself.

There was an empty niche for those diagnosed with Lynch syndrome and I have filled it with my blog and Buddhist outlook. I have given Lynch syndrome a much needed voice; I frequently blog about the emotional aspects of having a deleterious gene mutation and connect with others around the world who have been recently diagnosed with Lynch syndrome. I never want anyone to feel as I did when I was first diagnosed – terrified and alone. I want to be a resource of love, support, encouragement, hope, and validation for those with Lynch syndrome, or for any deleterious gene mutations for that matter. Just because we have hold a bad gene mutation does not necessarily mean it will be expressed in our lifetime. There are things we can do to fight it, and things like meditation have been shown to hold positive implications for our gene expression. Buddhism has centered me; it has taught me to let go of the past, be in the now, and not to fret about the future. I make a concerted effort to concern myself with things I can control now.

I truly believe the diagnosis and the suffering I have endured, along with my immersion in Buddhism have enlightened me in unimaginable ways, which would not have been possible otherwise. Thank you to Buddhism for the immeasurable strength and wisdom it has given me and thank you, Lynch syndrome – whilst you may be my greatest genetic nemesis, you have also been my life’s greatest teacher.

“Let me not pray to be sheltered from dangers but to be fearless in facing them. Let me not beg for the stilling of my pain, but for the heart to conquer it. Let me not look for allies in life’s battlefield but to my own strength. Let me not cave in.”

Previous articleAnimal Lover Goes to “Crazy” Extreme to Save Chickens from Your Dinner Plate
Next articleDo Buddhists Go to Heaven ???
Digital Media