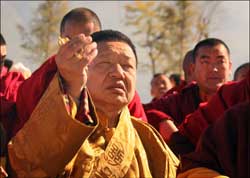 Akong Rinpoche founded the Samye Ling Tibetan centre and monastery in 1967. The body of Rinpoche is being taken to his native Tibet for cremation.

Akong Rinpoche was killed in China on Tuesday along with his nephew and his driver. A statement on the Samye Ling website confirmed plans for a ceremony in accordance with his high standing. It will take place at his monastery, Dolma Lhakang, in the Tibetan Autonomous Region.

That was where, at the age of four, he was identified as the reincarnation of an earlier leader, enthroned, and began the spiritual education required for a future abbot. A statement from his brother – Lama Yeshe – said Akong Rinpoche was travelling in China to distribute funds to projects supported by the charity Rokpa International which he founded – and was killed by individuals trying to rob him.

Chinese police have already said that three Tibetan men are in custody for the triple killing. Akong Rinpoche left a wife and three children and they have expressed thanks to people in the UK and overseas for the many messages of condolences they have received. With his departure, many expects Buddhist base behind Akong Rinpoche’s monastery will continue to thrive.