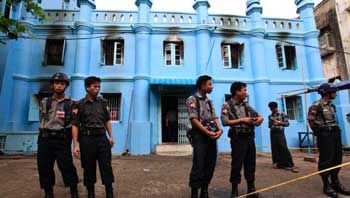 Myanmar’s well known Buddhist monk signed a peace agreement with a Muslim leader, a gesture between the two religious groups after more than a year of violence. A symbolic but important gesture aimed at cooling tensions between the two religious groups until a proper resolution is found. The monk, Wiseitta Biwuntha, better known as the Venerable Wirathu—leader of the 969 movement, accused by Myanmar experts and fractions of Buddhists and Muslims met the muslim activist Shwe Kyi Tuesday, their third meeting since May to promote interfaith cooperation.

The details of the agreement they reached—the first of its kind since violence between Buddhists and Muslims erupted last year—remain unclear, but its stated goal is to stop the spread of extremist views in both communities and eliminate interfaith discrimination. This caused lot of damages to both ethnic groups, mostly to minority Muslims.

“We are working toward cooperation on the Buddhist and Muslim issue,” the Venerable Wirathu has told The Wall Street Journal Thursday. “It is important to smooth the relationship and stop these conflicts from happening.”

The monk didn’t elaborate on specifics of the agreement, but said that he plans to rally Buddhists around interfaith cooperation broadly. His followers, he said, will work across the country to promote understanding—though they will avoid Rakhine state, where Muslim-Buddhist tensions remain exceptionally high, with more than 200,000 people still displaced by last year’s violence.

The Venerable Wirathu, though, will continue a campaign against marriages outside the faith by Buddhist women. He and his followers hope for a law requiring Buddhist women to get official permission to marry a man of another faith, and requiring the man to convert to Buddhism. The monk told The Wall Street Journal Thursday that more than four million signatures in support of these marriage curbs have already been collected. Myanmar’s population numbers 60 million, roughly 5% Muslim. Some in the Muslim community remain skeptical of this interfaith agreement, which they say puts the blame on Muslims for starting the past year’s violence.

“They need to be careful with the usage of the wording in this agreement, which now blames the conflict on Muslims,” said Myint Thein, patron of the Myanmar Muslim Network. “It is different for each case [of violence], and they should not look at the religion of the person responsible.” Mr. Shwe Kyi, who signed the agreement on behalf of the Muslim community, doesn’t represent the whole community, said Mr. Myint Thein, adding that more civil-society and religious leaders should be involved.

For Mr. Shwe Kyi, a business owner and representative of the Peace and Friendship Network—a community activist group—cooperation with  The Venerable Wirathu soffers the community a chance to escape the discrimination and isolation it increasingly faces.

Mr. Shwe Kyi said the agreement acknowledges the existence of extremist elements in both communities and calls for curbing their influence, though he, too, declined to elaborate on the details. He believes the monk is working to end tensions between Buddhists and Muslims.

“We know that Buddhism does not preach hate, and that Muslims have an equal chance in Myanmar,” said Mr. Shwe Kyi. “Now we have to build trust between the two communities—Muslim businesses are suffering now.”