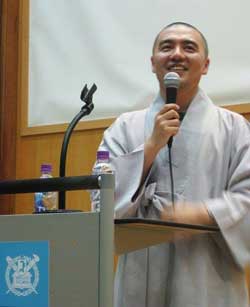 The copyright of Buddhist Monk Haemin’s soul-searching book has been sold to Penguin, the world’s largest publication group, paving the way for it to enter the U.S. market. The book, which as of yet lacks an English title, roughly translates as “Things You See When You Pause.”

Haemin was educated at Harvard and Princeton, and now teaches Asian religious studies at Hampshire College in the U.S. He often shares his thoughts about how to cope with hardships in daily life on social network services like Twitter, where he has a strong following among young Koreans.

First published in January 2012, his book of essays stayed in Korea’s top 10 bestseller list here for over one year and eight months, selling 2.4 million copies.

Its Korean publisher said, “It is difficult for even Japanese or European publishing companies to enter the U.S. market. Also, major U.S. publishing houses competed for the book’s copyright. Given this, the copyright export is very encouraging.”

The book’s copyright has already been sold to publishers in China, Japan, France, Thailand, Taiwan and Vietnam.

The Venerable Haemin said he will donate all of the proceeds from the latest deal to children from low-income families and organizations that provide free meals to the elderly.