Representatives of about 50 Buddhist monasteries are in the Indian capital to discuss fresh water conservation and preservation of the fragile ecosystem in the high Himalayan ranges and the Tibetan plateau.

The Himalayan range is seen in this aerial view taken from an aircraft flying over Nepal. In background is the Tibetan Plateau.

Tibetan spiritual leader Ogyen Trinley Dorje says studies show that the entire world faces an environmental emergency, but in the case of Tibet and all of Asia this is a “very immediate emergency.”

Speaking to VOA in New Delhi, he said, “Among particular concerns I think the unprecedented amount of development in Tibet is causing serious pollution of water sources and also of course the melting of the glaciers and permafrost caused by climate change are immediate source of threat to Tibet, Tibetan water and therefore to all of Asia which gets much of its water from the Tibetan plateau.”

The 28-year-old Dorje is the embodiment of the Karmapa Lama and is tipped to assume the mantle of Tibetan spiritual leadership after the life of the present Dalai Lama. 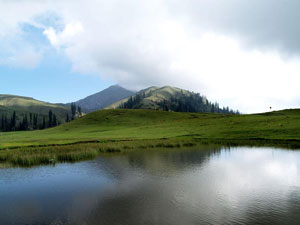 He is in New Delhi for a five-day conference on fresh water conservation being attended by monks and nuns from about 50 Buddhist monasteries scattered across the Himalayas in India and Nepal. He has not involved himself with political issues concerning Tibet, and has retained a low profile since fleeing Tibet in 2000.  But the environment is one of the issues he is espousing.

The 5th Khoryug Conference on Environmental Protection for Tibetan Buddhist Monasteries and Nunneries in the Himalayas began Friday. It was organized by the World Wildlife Fund’s Sacred Earth program and Khoryug, a network of 50 Buddhist monasteries.

It is highlighting problems like desertification of grasslands, drying up of lakes and river systems, and dislocation of pastoral nomads in the Tibetan plateau and other Himalayan regions.

The Buddhist monks and nuns will be taught how to protect local water sources and how to recharge groundwater using techniques like rainwater harvesting. Organizers hope they will go home to create awareness in local communities and also get the message across to monasteries in Tibet, with whom they often have connections. 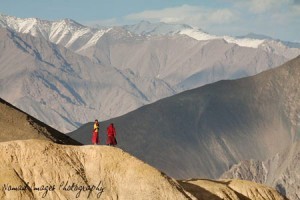 Tenzin Norbu, Director of Environment and Development in the Central Tibetan Administration in Dharamsala, said, “Whey they go back, they should respect the value of the water. Since most of these are from the Himalayan area which is connected to the Tibetan plateau, they should know the importance of the place where they came from, so that they can also create local awareness on how important it is to protect the Himalayan glaciers.”

In New Delhi, Dorje has also compared the relationship between Tibet and India, where Buddhism originated, to that of a mother and child. Speaking through a translator, he called on Indians to retain that bond.

“What is of great importance in the present is that the people of India recognize the tremendous profundity and the ancient source of their connection with Tibet,” said Dorje. “This connection is not superficial, it is not simply political, it is environmental and cultural and it is a connection on the level of the heart that is very, very ancient. So it is important that as many people as possible come to understand the depth of this connection and also understand that for Tibetans who have left Tibet such as the Dalai Lama and countless others, India has been our soul, our only place of hope and refuge.”

Dorje says that the Buddhist value of contentment could play a role in preserving the environment by countering consumerism, which he says is exhausting the Earth’s resources.