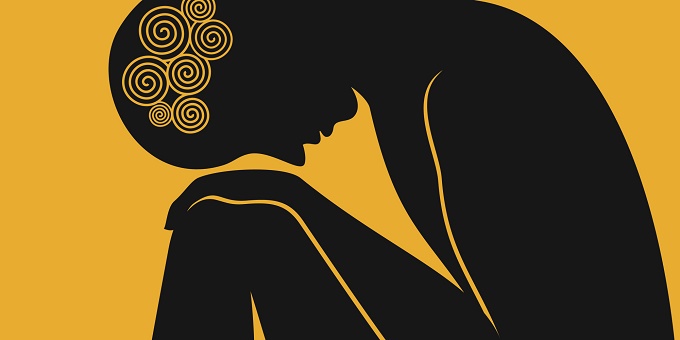 By: Josh Korda
Via: huffingtonpost.com

Many people use the words fear and anxiety interchangeably, as if they referred to identical emotional states. Yet while we may conceive of the two words as entirely corresponding, the neurobiology are quite different. The physiological reactions that occur when we hear the crackling sound of footsteps behind us, while walking alone on a wooded trail, creates a soaring heart rate, a knotted stomach, an limbs activated, ready to run. In some truly overwhelming situations, we may literally ‘freeze’ with fear, unable to move, such as someone frozen in the path of a charging bear or tiger.

Meanwhile, anxiety doesn’t fully urge us to fight, flee or freeze; it is there to alert us to the possibility of danger: slight dizziness, nausea, dry mouth and racing, repetitive thoughts. Anxiety primes us only to worry even more.

Many clinicians define fear as a negative reaction triggered by present, dangerous stimuli (such as the sound of a bear in the woods), whereas anxiety is triggered by uncertainty: while we’re anxious no real threat is actually present; we’re simply alert to the possibility of future, unseen dangers.

To put it simply: We can point to our fears, while we’re anxious about what we don’t know.

It’s worth noting that any or all of the sensations present during a fearful event can, in the future, turn into the triggers of subsequent anxiety disorders. This is due to the part of the brain that is most alert and functioning during threatening situations — the amygdala — which is not particularly smart or discerning; it records whatever seems important during a menacing event, unable to discern what is benign from what’s dangerous. Let’s use an example: While driving and listening to an old Ramones song we wind up in a car collision, the same Ramones tune in the future might activate anxiety — we’ll feel nauseous and uncomfortable, though the tune had nothing to do with the accident. In the future, our discomfort with the Ramones will strike us as mysterious, if we even note the connection.

Another example: suppose the once, during our childhood, perhaps in the second grade, a teacher wearing a cardigan asks us a question and when our answer is disappointing, the teacher shames us in front of a classroom of our peers. In the future we may very well become anxious around people who wear brown cardigans; once again we won’t discern why, and may well add spurious reasons to justify our discomfort and disapproval.

So everything recorded during a hazard can turn into a trigger for anxiety. Why is the amygdala so fallible? Well, a ‘fast and dirty alarm system in the brain’ helped to keep our ancestors alive; think of them living hundreds of thousands of years ago in a world filled with predators, the average life expectancy barely 20 years. So the midbrain needed to work fast. This is why it is preconscious, working at too quickly for conscious oversight, which would only slow it down. Yes, conscious awareness would be more accurate in discerning what’s truly dangerous from what’s safe, but consciousness is far too slow to save us from lurking bears or coiled snakes, so evolution decided that its better to be safe than sorry, to mistake a few sticks for snakes. Even if we wind up, later on, needlessly terrified of entirely safe people, places and things.

Anxiety is very human trait that relies on our ability to anticipate and speculate about the future; imagination allows us to visualize impossible outcomes and unlikely scenarios — and to worry about them. The capacity to fantasize can allow us to write wonderful books, plot charming movies and paint beautiful paintings, not to mention construct utopian ideals to strive towards, but worry can lead to spiraling thoughts, insomnia, psychological disorders aplenty; much of the content of our minds no longer serve us well, rendering us tormented and, at times, isolated and distraught.

Yes, the mind can really play tricks that make it all to easy to abandon the present, which is, of course, the only place of true safety and utility. When we find the mind latching onto unlikely narratives that we can’t reason with or let go, sometimes we have to learn how to trick the mind into disarming itself.

Here are some spiritual tools we can use:

The second solution is to greet, rather than resist or even dread, our worries and anxieties each time they arise: note how the Buddha welcomed his inner tormentor, Mara, always with great patience. Personally, I even give my personal demons names, but I never give my anxieties negative or condescending titles; the point of greeting each visitor is to avoid believing that worry is actually who I am, rather than just a visitor in the mind. If I don’t identify with anxiety, I can give it permission to arise without resistance or clinging. So when the sweaty hands, tension and racing thoughts begin, I simply think “Welcome anxiety. You’re allowed.” While this might sound counterproductive, reducing the resistance to anxiety has been clinically shown, in a wide variety of MBSR studies, to reduce the strength and duration of anxiety attacks. I’ve found this out over and over again through the years, the faster I grant permission to an emotional energy to arise, the less painful it feels and the faster it passes.

Affect labeling, a clinical term for noting our emotional states, either aloud or in handwriting — “I’m frightened/anxious/scared” — has been shown to be effective as well. A study of high school students demonstrated that those who wrote out their fears before taking an exam invariably fared better in the test and experienced less trepidation. If, after we’ve journaled out an anxiety, worry returns with some energy in persistence, remind it that we’ve given it time to vent, now its our turn to enjoy life for a little while, until our next journal session. After a few days pass we can return to these notations; with a fresh perspective we may note that anxiety is actually the activation of an ‘inner child’ that believes every new challenge in life will lead to abandonment and disaster; in essence a repetition of childhood abandonments or traumas. While we’ve grown up to be adults, our fears still view the world from the perspective of a frightened infant, seeing annihilation around every corner.

Another tactic is to question our anxiety honestly and with interest, trying to understand its logic: I use the question “And why is that so bad?” Generally this practice reveals the insanity belying most of my anxiety. For example, many years ago, when I was anxious about an upcoming meeting with a higher up at work, I put this practice into use: I asked: “And why am I worrying about speaking with my boss?” My anxiety responded: “Because they might fire me!” “And why would that be so bad? “I might wind up penniless and unable to pay my rent!” “And why would that so bad?” “I’ll be homeless, living on the streets! Vulnerable to roving gangs — I might be stabbed and killed.” And so, with a few questions, the overblown and ludicrous nature of my anxiety was revealed — it turned a meeting with my employer into a life threatening endeavor.

Finally, I’d also like to recommend the buddhist practice of appropriate attention: Yoniso Manasikara in pali. The Buddha described this practice as “understanding the appeal, drawbacks and escape from behaviors that cause suffering.” (sn 12, Nidana-samyutta Sutta)

Let’s investigate the worrying mind through the lens of appropriate attention:

The Appeal of Anxiety and Worry: dreading possible future calamities, visualizing catastrophes, appeals to the mind as it creates a false of being prepared for unwanted developments. When I worry, I believe I’m less likely to be caught off guard, which makes me feel safer.

The Drawback of Anxiety and Worry: conjuring up a variety of misfortunes, most of which will never come to pass, creates an unquiet mind that cannot settle peacefully into the present moment, where speculated catastrophes have yet to occur; the mind prone to worrying doesn’t appreciate times of joy, as it is forever surveying the imagination for disasters looming in the realm of possibilities.

The Skillful Escape from Anxiety and Worry: given that the worrying mind is seeking a sense of security — which is revealed through reviewing its appeal — I might ask myself: “what skillful ways can I provide the mind with a sense of security in times of uncertainty?” Skillful escapes generally require creativity. I might conclude that rather than worrying, my mind would more fruitfully establish a sense of security by reflecting on all the times in life I’ve been caught off guard by sudden events — job losses, relationships dissolving — yet survived without any preparation. Such a reflections build a sense of reassurance, and meet our underlying need.
I hope the above is of help to some and worth any time you invested into it.