When I was moving towards Buddhism, what acted on my imagination was the image of the Buddha, the representation of a human being whose demeanour reflected composure and self-knowledge. It seemed to be the projection of a human possibility, perhaps illusory, but it threw into relief our ordinary human disarray, particularly at first my own. Later I came to find that Buddhist practice was at its most authentic when I sat in meditation alongside others, an incipient sangha (community of practitioners). 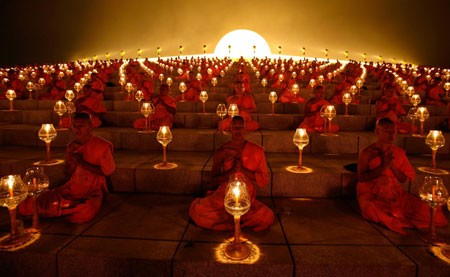 The core metaphor is in the name, the Buddha, the awakened one, and in the cognate term bodhi, the condition of being awake. I never thought of this awakening as something I must “believe in” before I could pursue it. It presented itself as a possibility that had to be investigated. Focusing on this image, this metaphor, led me to ask whether it represented a genuine and desirable human possibility, whether it could be embodied or realised.

It was apparent from Buddhist discourse that awakening was associated with prajna (wisdom) and karuna (compassion). Such language resonated with me partly because I seemed to hear its echo in the ancient Greek idea of philosophy as a form of eros or desire in which the quality and timbre of the impulse was tempered by the nature of its object, which was not simply wisdom but wisdom coupled with virtue.

In common with a growing number of philosophers, I had been persuaded by the anti-metaphysical thrust of contemporary philosophy, but frustrated by the dominance within the discipline of a set of research projects that in effect constituted a sort of avoidance of subjectivity, a sapiential deficit.

The pressing question then – which had considerable existential force – was whether one could retrieve a worthwhile notion of wisdom from the metaphysics within which the idea had originally been framed. There was another way to ask the question, too: what must be salvaged from religion in a postmetaphysical world – and how adequate to the human condition are the ideas that constitute the public profile of secular humanism?

This seemed to me to be the point of entry for a dialogue with the Buddhist traditions, with a developing secular humanism that was also open to the possibility of learning from the Abrahamic traditions, aspects of which were part of its own history.

The connection with a notion of eros that was refined by its object found its counterpart in Buddhist discussions of the desire for nirvana, for that extinguishing of destructive and egocentric passions that it was claimed were the obstacle to bodhi. It was clear from the language of both traditions that we were not talking about a dispassionate inquiry, but one in which the whole person was engaged. The power that the Buddhist imagery exerted upon the imagination did not entail a sort of anti-intellectualism that ignored the hard questions.

We had to understand that the exuberantly extravagant ontologies of the premodern world had already collapsed, and that individual doctrines had to be treated on their merits. As the traditions, both Buddhist and classical, themselves insisted their merits were to be determined by how they answered to experience. But this is not just immediate experience, which may need to be challenged because forms of our everyday experience are determined by subjective formations that may obscure and narrow our vision.

So we need to test the claim that these distortions happen, and to see whether our subjective formations can indeed be transformed. The poet Rilke offers an aesthetic version of this – the beasts of the forest fall silent when they hear Orpheus singing, and this quietening of the passions lets in a larger perspective.

Kierkegaard had claimed that “faith” was “the highest passion of subjectivity” when he contrasted it with “Christendom”. The “faith” he refers to is a culturally specific, Abrahamic formation of spirituality, no doubt rich in metaphorical possibilities. But we can’t get back there. In a secularised, postmetaphysical culture the certitude has collapsed that had attached to the system of belief within which faith in this sense had been conceived and developed. This has meant that such faith – the role of believer – is widely unavailable, except as a metaphorical vehicle, a mythological residue of projections, for the transformative struggle to embody the values of justice and compassion.

So we are left with the question, what kind of project can be adequate to the idea of the highest passion of subjectivity? One direction is towards self-knowledge. The attraction of wisdom is based on the bitter experience of folly and human misery, the haunting sense of the Fool’s judgment on Lear: “Thou shouldst not have been old before thou hadst been wise.”