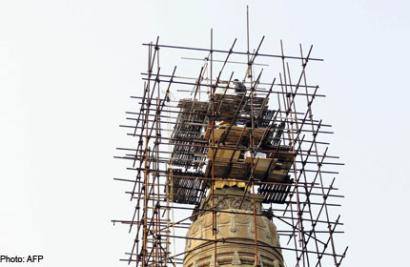 “Although we are not sure how relevant these contractions with so much expense relate Buddhism, we’ve decided to share this story with you to inform the development of Mahabodhi temple in India. You may express your opinion via a comment on the website and we’d appreciate your opinion as always.”

India’s Mahabodhi Temple, one of the world’s holiest Buddhist shrines, is to have its dome inlaid with 300kg of gold donated by Thailand’s king and other devotees, officials said on Thursday.

The gold would be worth around US$14.5 million (S$18 million) at the current international price. 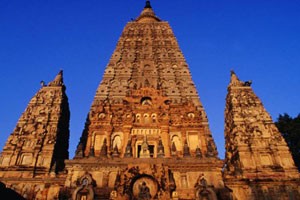 The precious metal arrived late on Monday on a special flight from Bangkok and is under armed guard at the temple in Bodh Gaya, a holy town about 100km from Patna, the capital of Bihar state.

“A 40-member team including experts and two dozen commandos from Thailand have arrived at Bodh Gaya with gold in 13 boxes,” Mr Arvind Kumar Singh, a member of the temple management committee, told AFP.

The work at the complex, which was rocked by a series of crude bombs in July, is likely to be finished in about a month.

The Mahabodhi temple, built about 1,500 years ago, is a Unesco world heritage site and marks the place where the Buddha is said to have attained enlightenment in 531 BC.

Mr N. Dorjee, secretary of the temple committee, said about 100kg of gold had been donated by the Thai king and the rest by Buddhist devotees.

The decision to offer gold for the dome was taken last year by King Bhumibol Adulyadej after which permission was sought from the local authorities, Mr Dorjee said.

He said: “The first phase of the work involved chemical treatment, which was completed in August. It prepared the foundation for gold plating.

“Stairs have been now installed around the temple’s dome to enable experts to reach the top of the structure and inlay it with thin gold sheets.”

Previous articleCouple born on the same day, met as teenagers, eloped because their parents disapproved. After 75 years of wedded bliss at 94, they died just a day apart,
Next articlePrince of Wales to visit the tooth relic of Buddha
Digital Media