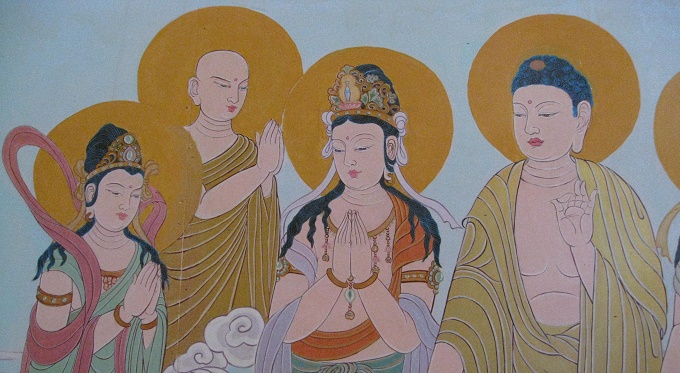 One doctrine agreed upon by all branches of modern Buddhism is that “this world is not created and ruled by a God.” {1} The Buddha himself rejected metaphysical speculation as a matter of principle, and his teachings focused entirely on the practical ways to end suffering.

On the other hand, the Buddha did not explicitly rule out the existence of a God or gods, and very shortly after his death a devotional element formed within Buddhism. Stupas were built to contain relics of the Buddha and pilgrimage were made to places where he had walked.

Soon the idea of past and future Buddhas developed, with Maitreya, the Buddha yet to come, being especially important. In the Mahayana system, a variety of celestial Buddhas and bodhisattvas came to be revered and looked to for assistance on the path to enlightenment.

Especially devotional is Pure Land Buddhism, a subdivision of Mahayana that began in China. Pure Land Buddhists revere and call on the name of the Amitabha Buddha, who will grant them entrance to the paradisical “Pure Land” after death. {3}

As Buddhism spread into cultures with existing religious beliefs, it incorporated local deities and religious practices into the Buddhist system. For instance, in China, a popular boddhisatva became the female deity Kuan-yin, the giver of children. {4}

Finally, Tibetan Buddhist cosmology features a “vast number of divine beings (each with its own family, consort, and pacific and terrifying aspects), which are considered symbolic representations of the psychic life by the religiously sophisticated and accepted as realities by the common people.” {5}

There are six realms of existence in the Tibetan cosmology, one of which is the realm of the gods. The gods enjoy the fruits of good karma in a paradise until their karma runs out and they are reborn in a lower realm. In fact, gods must be reborn as humans to attain enlightenment. {6}

In view of the above factors, scholars and Buddhists alike tend to describe Buddhism as atheistic in the sense that it denies an eternal creator God {7}, while recognizing its theistic and devotional elements. The Encyclopedia Britannica explains,

While the contemplative elite may deny the real existence of gods and demons together with the rest of phenomenal existence, the majority of Buddhists from the earliest times in India, and in other countries where Buddhism has spread, have never neglected indigenous religious beliefs. {8}

Previous article3 Signs You’ve Met Someone In A Previous Life
Next articleAre Buddhists non-theists or atheists – and what’s the difference?
Digital Media