Building Homes for Homeless: People in Wisconsin shows how to do it 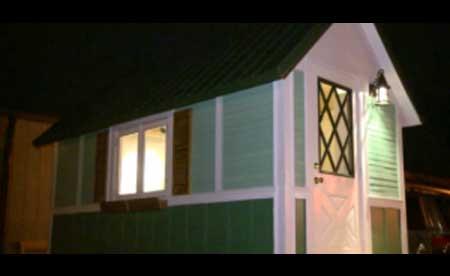 Homelessness is a growing problem in the United States, hundreds of thousands of citizens are currently homeless and living in a nation whose public representatives are trying to criminalize them rather then help them or solve the problem.

Fortunately, us humans can choose direct action to help their fellow human beings suffering and in need. A group in Wisconsin is making real progress toward ending homelessness, with over 50 volunteers from the Occupy Madison group are working to implement their plan to fight inequality and build tiny homes for the homeless with their Tiny House Project.

In January 2013, 831 homeless were found to be living in the area of Madison alone. The Tiny House Project is an initiative to build micro-homes for the homeless. Although these dwellings are not very spacious, the living spaces will include necessities: bed, insulation, toilet. They are designed to be heated by propane and include a pole-mounted solar panel which will power the light in the home. The total cost for building one home, at 98 square feet (approx 9.1 square meters), is roughly $3,000. Each one is paid for entirely by private donations, allowing people to make a direct investment in their communities. Occupy Madison (OM Build) continues to build more tiny houses in the hopes that one day they will be able to purchase an area of land in order to create a tiny village with as many as 30 homes. 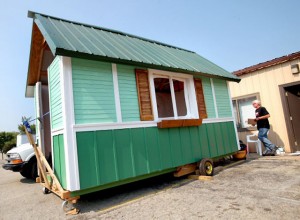 The houses are mounted on trailers which can be legally parked on the street, as long as they’re moved every 48 hours. Occupy organizers were also recently able to have successfully convinced the Madison Common Council to change the city’s zoning laws so the homes could be parked on private property with permission. The Occupy Madison group satisfied with its tangible progress toward read solutions in the war on homelessness, it has adopted the tagline “Doing what the government won’t do,”

The group hopes to have at least 10 homes built by the end of next year, having completed their first home this month. Betty Ybarr, the first resident resulting from the project,  is a formerly homeless woman who spent many of her days living in a tent. Ybarra was able to move into her 98-square-foot tiny home on Christmas eve (24th December, 2013). Bruce Wallbaum, project organizer for Occupy Madison, along with other organizers, is working with area churches to allow the parking up to three of these tiny houses per parking lot.

Many of the homes’ recipients are themselves directly contributing  to the project and helping to build their own future homes, sharing in the excitement and responsibility of having a place to call their own. For those who would like to volunteer or donate directly to the project, you can do so through the Occupy Madison website.

“There is no comparison between having a place to go at night, and know that you can close the door and sleep comfortably and not freeze to death or have your possessions stolen, there’s just no substitute for that. – Luca Clemente, organizer.

Previous article6 Life Lessons from Leo Tolstoy
Next articleLearning how to face the death !
Digital Media