Can you explain this to me? Catholic mass grave sites of 350,800 missing children found… 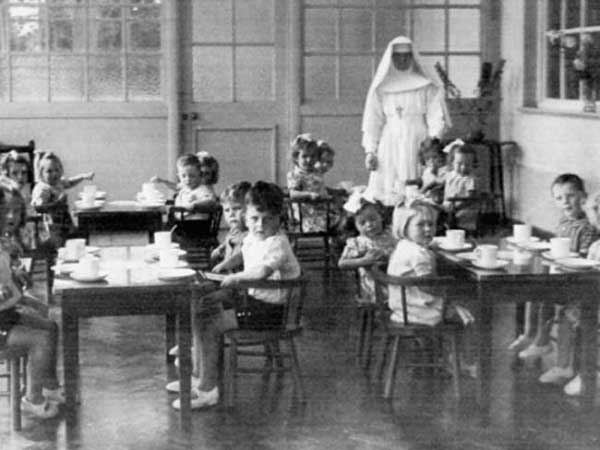 The atrocity of close to 800 emaciated childrens’ bodies buried in a Irish Nuns’ septic tank represented the 34th child mass grave site linked this week to the Catholic Church. Pope Francis was being prosecuted by the International Common Law Court of Justice (ICLCJ) in Brussels for allegedly trafficking 300,000 children of political prisoners through Vatican Catholic Charities during Argentine’s Dirty War.

According to witness testimony last week some of those orphans ended up in a child mass grave site in Spain. Last year’s ICLCJ prosecution concerned 50,000 missing native Canadian children. There have been 32 child mass grave sites uncovered so far in Canada, most of them on Catholic-run native residential school grounds.

Unfortunately the over 350,800 children suspected to be in Catholic child mass graves sites in three countries paled in number to Catholic Priest sex abuse victims across the globe. As of November 2013 over ten million Catholic Priest child sex abuse cases have been documented as shown here. These 10,077,574 cases represented a mere fraction of total crimes committed. Only an estimated 10% of sex abuse victims were thought to speak out about their sex abuse and just 10% of those cases saw the inside of a court room.

Amnesty has been offered to citizens or employees of the Crown of England and Vatican willing to give sworn testimony or evidence that leads to the prosecution of top Vatican and government officials who may have committed crimes. For providing evidence rewards up to 10,000 euros or around 13,660 dollars was available through the ICLCJ court.

The Irish child mass grave site containing bodies of children from age two days to nine years, was located at a now-defunct Catholic home for unwed mothers. According to death records, the little ones were fragile, pot-bellied, emaciated and died as late as 1961 from malnutrition and infectious diseases such as measles and TB.

Children of the Canadian Catholic native residential schools were determined to have been murdered or died of malnutrition, human experimentation, torture, Small Pox infection or as Eyewitness Irene Faveltestified in this video, were thrown into a furnace. Favel claimed that in 1944 she witnessed a newborn infant incinerated by a priest at Muscowegan Catholic Indian School, Saskatchewan Canada. The child torture was documented for court in Kevin Annett’s “Hidden No Longer” available for free here.

The Bon Secours Sisters ran the Irish mass grave site and “mother and baby home” called St Mary’s in Tuam north of Galway city. The Catholic “home” had a reputation for children dying at a rate four times higher than the rest of Ireland. Unwed mothers were punished as “atonement for their sins” by being forced to give up their children and working for two or three years without wages.

The 2013 award-winning drama film “Philomena” depicted the plight of 2,200 infants who survived Ireland’s Catholic homes. The children were forcibly adopted or placed into child labor situations, mainly in the US. Catholic officials have consistently denied they received payments for these so-called “adoptions” and insisted verifying documents were lost in a fire.

The Vatican, British Crown and Canadian government have refused excavation of the 32 Canadian mass grave sites believed filled with native children. Before licensed archeologists were turned away, human remains of children were uncovered at the larger sites in Brantford Ontario and Port Alberni British Columbia Canada.

Critics contended the Catholic Church had an ongoing reluctance to hand over internal records of Vatican Catholic Charities out of fear further horrors could come to light. Such was in the case of the Irish Magdalene Laundries where unwed mothers performed forced labor without compensation to four Catholic orders. After years of successful litigation on the case victims still remain uncompensated.

A present day victim of the Catholic Church was Jamaican and British Soldier Vivian Cunningham. He remained drugged in the St. George’s Hospital in Stafford England (ph: 44 01785 257888) for asking questions about Queen Elizabeth’s arrest warrant. The 2013 ICLCJ court found Queen Elizabeth and Prince Phillip guilty of kidnapping on Oct. 10 1964, ten native children from the Catholic-owned Kamloops residential school in British Columbia Canada. British citizen David Compan and his wife were accosted, drugged, arrested and incarcerated without charges in the London Park Royal Mental Health Center. Compan’s sin? He posted Queen Elizabeth’s arrest warrant on a Catholic Church in London. Compan’s arrest was captured in this video.

The Roman Catholic Church has “systematically” protected predator priests, allowing “tens of thousands” of children to be abused, a United Nations committee reported directly after Pope Francis became pontiff. In May the United Nations Committee Against Torture gave the Vatican one year to demonstrate their commitment to recommendations made in their latest UN report on Crimes Against Children by the Catholic Church.

The ICLCJ court case in Brussels charging Pope Francis and other global elites for Crimes Against Humanity was expected to extend for over a year. Last year’s ICLCJ court found 40 global elites guilty and ended with the unprecedented resignation of former Pope Ratzinger.