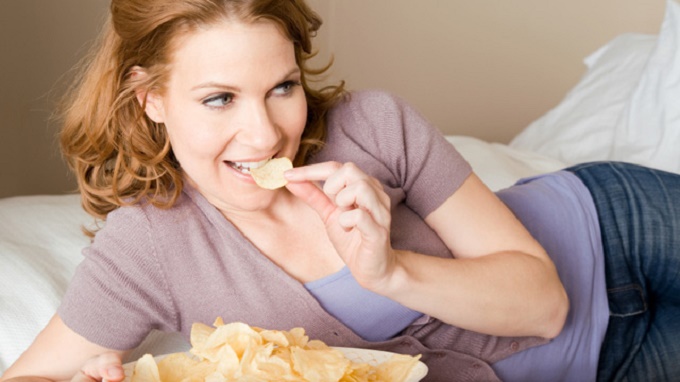 This article and the concerned topic is highly debated worldwide. It is doctors advice worldwide not to eat instant foods, processed foods and the foods that is made to keep for years without becoming spoiled.  Instead, the need and the search for more organic real time food are sought. Anybody with some common understanding will realize chemicalizing food can cause various disorders in the long run.

To understand the nature of Pringles and other stackable chips, forget the notion that they come from actual potatoes in any recognizable way.

The Pringles Company (in an effort to avoid taxes levied against “luxury foods” like chips in the UK) once even argued that the potato content of their chips was so low that they are technically not even potato chips.

So if they’re not made of potatoes, what are they exactly?

The process begins with a slurry of rice, wheat, corn, and potato flakes that are pressed into shape.his dough-like substance is then rolled out into an ultra-thin sheet cut into chip-cookies by a machine.

“The chips move forward on a conveyor belt until they’re pressed onto molds, which give them the curve that makes them fit into one another. Those molds move through boiling oil … Then they’re blown dry, sprayed with powdered flavors, and at last, flipped onto a slower-moving conveyor belt in a way that allows them to stack. From then on, it’s into the cans … and off towards the innocent mouths of the consumers.”

I suspect nearly everyone reading this likely enjoys the taste of potato chips. However, they are clearly one of the most toxic processed foods you can eat—whether they’re made from actual potato shavings or not.

One of the most hazardous ingredients in potato chips is not intentionally added, but rather is a byproduct of the processing.

Acrylamide, a cancer-causing and potentially neurotoxic chemical, is created when carbohydrate-rich foods are cooked at high temperatures, whether baked, fried, roasted or toasted. Some of the worst offenders include potato chips and French fries, but many foods cooked or processed at temperatures above 212°F (100°C) may contain acrylamide. As a general rule, the chemical is formed when food is heated enough to produce a fairly dry and brown/yellow surface. Hence, it can be found in:

How Much Acrylamide are You Consuming?

The federal limit for acrylamide in drinking water is 0.5 parts per billion, or about 0.12 micrograms in an eight-ounce glass of water. However, a six-ounce serving of French fries can contain 60 micrograms of acrylamide, or about FIVE HUNDRED times over the allowable limit.

Similarly, potato chips are notoriously high in this dangerous chemical. So high, in fact, that in 2005 the state of California actually sued potato chip makers for failing to warn California consumers about the health risks of acrylamide in their products. A settlement was reached in 2008 when Frito-Lay and several other potato chip makers agreed to reduce the acrylamide levels in their chips to 275 parts per billion (ppb) by 2011, which is low enough to avoid needing a cancer warning label.

The 2005 report “How Potato Chips Stack Up: Levels of Cancer-Causing Acrylamide in Popular Brands of Potato Chips,” issued by the California-based Environmental Law Foundation (ELF), spelled out the dangers of this popular snack. Their analysis found that all potato chip products tested exceeded the legal limit of acrylamide by a minimum of 39 times, and as much as 910 times! Some of the worst offenders at that time included:

Beware: Baked Chips May Be WORSE than Fried!

If you think you can avoid the health risks of potato chips by choosing baked varieties, which are typically advertised as being “healthier,” think again. Remember that acrylamide is formed not only when foods are fried or broiled, but also when they are baked. And according to U.S. Food and Drug Administration (FDA) data on acrylamide levels in foods, baked chips may contain more than three times the level of acrylamide as regular chips!

Interestingly, the same trend holds true for other foods, too, which suggests that baking processed potatoes at high temperature may be one of the worst ways to cook them. For instance, according to the FDA’s data, Ore Ida Golden Fries contained 107 ppb of acrylamide in the regular fried version and 1,098 when baked. So remember, ALL potato chips contain acrylamide, regardless of whether they are natural or not; baked or fried. Likewise, they will ALL influence your insulin levels in a very negative way.

Acrylamide is Not the Only Danger

Acrylamide is not the only dangerous genotoxic compound formed when food is heated to high temperatures.

A three-year long EU project, known as Heat-Generated Food Toxicants (HEATOX), whose findings were published at the end of 2007, found there are more than 800 heat-induced compounds, of which 52 are potential carcinogens. In addition to their finding that acrylamide does pose a public health threat, the HEATOX scientists also discovered that you’re far less likely to ingest dangerous levels of the toxin when you eat home-cooked foods compared to industrially or restaurant-prepared foods.

Additionally, the HEATOX findings also suggest that although there are ways to decrease exposure to acrylamide, it cannot be eliminated completely.

According to their calculations, successful application of all presently known methods would reduce the acrylamide intake by 40 percent at the most—which makes me wonder whether chip manufacturers have really succeeded at this point in reducing acrylamide levels to within legal limits… There’s no updated data as of yet, so there’s no telling whether they’ve been able to comply with the 2005 settlement.

For more in-depth information about acrylamide, I recommend reading the online report Heat-generated Food Toxicants, Identification, Characterization and Risk Minimization. In general however, just remember that cooking food at high temperatures is ill advised. A few of the most well-known toxins created in high-temperature cooking include:

– Heterocyclic Amines (HCAs): These form when meat is cooked at high temperatures, and they’re also linked to cancer. In terms of HCA, the worst part of the meat is the blackened section, which is why you should always avoid charring your meat, and never eat blackened sections.

– Polycyclic Aromatic Hydrocarbons (PAHs): When fat drips onto the heat source, causing excess smoke, and the smoke surrounds your food, it can transfer cancer-causing PAHs to the meat.

– Advanced Glycation End Products (AGEs): When food is cooked at high temperatures (including when it is pasteurized or sterilized), it increases the formation of AGEs in your food. When you eat the food, it transfers the AGEs into your body. AGEs build up in your body over time leading to oxidative stress, inflammation and an increased risk of heart disease, diabetes and kidney disease.

The Search for a “Healthful” Chip Continues…

Like a modern-day search for the Holy Grail, chip manufacturers keep searching for methods to improve the image of their health-harming but profitable snacks. For example, by the end of 2011, about half of Pepsi’s Frito-Lay brand snacks will be reformulated with all-natural ingredients. The switch is part of PepsiCo’s master plan to tap into the healthy foods market share. The Wall Street Journal recently reported the company hopes to boost their nutrition business from $10 billion to $30 billion by 2020.

The company will remove dietary hazards like monosodium glutamate (MSG), replacing it with natural seasonings, such as molasses and paprika. Artificial colors will be replaced with beet juice, purple cabbage and carrots. All in all, about different 60 snacks are scheduled to get an all-natural makeover.

This is certainly a good example of how consumer demand can alter the direction of food manufacturers in a positive way.

The reformulated chips may end up being less bad for you than the original formulations. However, chips will never be truly healthful. All-natural chips may be the lesser of two evils, but if consumed regularly, they will still push your health in the wrong direction… There’s no getting away from the fact that modern plagues such as cancer, heart disease, obesity, and diabetes have a dietary component, and potato chips and French fries will always be a losing bet if you want to avoid becoming another disease statistic.

How to Avoid Heat-Induced Toxins in Your Diet

Ideally, you should consume foods that are raw or minimally processed to avoid these types of toxic byproducts—the more raw food, the better. My nutrition plan emphasizes the need for at least one-third of your foods to be consumed raw. Personally, I consume about 80 percent of my food raw, and I find it is one of the most important factors that help keep me healthy.

It may take you awhile to switch over to a less processed diet, but throwing out the most obvious culprits would be a great start.

– All sodas (both regular and diet, as artificial sweeteners may be more problematic than fructose)

Aside from creating potentially toxic byproducts, cooking and processing also depletes the food of valuable micronutrients, which is another reason for eating as much raw food as possible. This includes protein sources such as eggs. Raw whole eggs from organic, pastured chickens are an incredible source of high-quality nutrients that many are deficient in. Raw milk is another good example of a food that is beneficial in its raw state but becomes harmful after it is pasteurized.

By opting for foods that will benefit your health, such as raw, preferably organic and/or locally-grown vegetables, organic grass-fed meats, healthy oils, raw dairy, nuts and seeds, you can change your health for the better. These are the foods that are truly natural, and quite easy to prepare once you get the hang of it.

For a step-by-step guide to make the transition to a healthier diet as simple and smooth as possible, simply follow the advice in my optimized nutrition plan.

Remember, eating fresh whole foods is the “secret” to getting healthier, losing weight and really enjoying your food. It’s unfortunate that so many are under the mistaken belief that it’s “next to impossible” to create a meal without processed foods. Bruce Weinstein and Mark Scarbrough tackle this issue head-on in their book Real Food Has Curves, which is a great starting point to “relearn” the basics of how to enjoy and prepare real food.

Once you get used to it, you’ll find you can whip up a healthful meal from scratch in the same amount of time it would have taken you to drive down the street to pick up fast food. The main difference will be greater satisfaction, both physically and mentally, and perhaps even financially, as processed foods typically end up being more expensive than cooking from scratch.