In Case Of Emergency, Remove Your Bra. This Is Not Silly, This IS Science!

Dr Elena Bodnar, a Ukrainian scientist, has created an ’emergency bra’ that can be turned into a face mask to protect against lethal chemical explosions, biological hazards and unpredictable violent attacks.

Though the brassiere looks and is used like an ordinary bra, it isn’t. In the event of an emergency, you can take off the EBra, separate the cups from each other, place your mouth and nose into the cup’s interior, extend the bra strap over your head (remember the cabin crew’s in-flight announcement for oxygen masks?) and breathe normally.  The brassiere converts into a pair of protective face masks, one for the brassiere wearer and one for a needy bystander.

For her invention, Bodnar won the 2009 Ig Nobel Public Health Prize, a spoof of the actual Nobel Prize, which acknowledges 10 scientific achievements that ‘first make people laugh, and then make them think’. In her Ig acceptance speech, she joked, “It takes only 25 seconds for average woman [sic] to use this personal protective device. Five seconds to remove, convert and apply your own mask, and 20 seconds to wonder who the lucky man is she is going to save“.

The Associated Press reports that Dr Bodnar, who’s now based in Chicago, initially got her idea after the 1986 Chernobyl nuclear disaster. She explains,  “If people had had cheap, readily available gas masks in the first hours after the disaster…they may have avoided breathing in Iodine-131, which causes radiation sickness,” adding that a bra-mask could also be used during such disasters as fires, dust storms or a swine flu outbreak. She says, “You have to be prepared all the time, at any place, at any moment, and practically every woman wears a bra“. 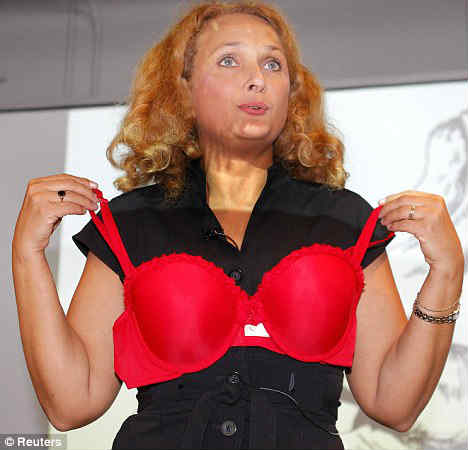 According to a report in CNET, there are plans for a counterpart device for men in the works, though the precise shape it will take has yet to be revealed.