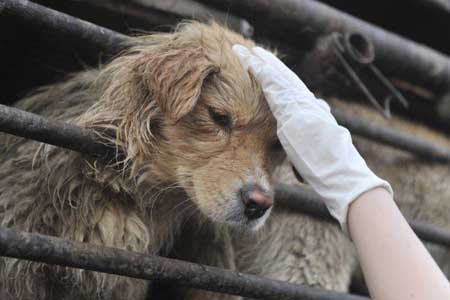 Dogs are slaughtered and skinned in the streets of Qianxi township during the ancient festival, usually held in October.

China has banned a dog-eating festival that dates back more than 600 years after a Chinese internet uproar over the way dogs are slaughtered, the official Xinhua news agency reports.

Dogs are butchered in the streets of Qianxi township in coastal Zhejiang province to prove the meat is fresh during the ancient festival, which is usually held in October.

The festival marks a local military victory during the Ming dynasty, in which dogs in Qianxi were killed so they would not bark and alert the enemy, state-run Xinhua says.

After the victory, dog meat was served at a celebratory feast, and since then local people have eaten dog meat at temple fairs held during traditional Chinese holidays, Agence France-Presse reported.

“The ancient fair was replaced by a modern commodity fair in the 1980s, but dog eating has been kept as a tradition,” Xinhua says.

More from GlobalPost: Can eating dogs be done humanely?

“However, vendors began to butcher dogs in public a few years ago to show their dog meat is fresh and safe, as a way to ease buyers’ worry that the meat may be refrigerator-preserved or even contaminated.”

Thousands of Chinese internet users criticized the dog-eating festival on social networking sites, and called for the local Qianxi government to intervene.

“The government’s quick response should be encouraged. I hope eating dogs will not be a custom there anymore. It’s not a carnival, but a massacre,” wrote an internet user named “Junchangzai” on a Chinese micro-blogging website, in a post that was “re-tweeted” 100,000 times, Xinhua says.

While dog ownership was banned in China during the Cultural Revolution as a bourgeois habit, it has become increasingly popular with China’s growing middle class and one-child families, Reuters says.