What is China trying to hide? : Stand with Tibetan people 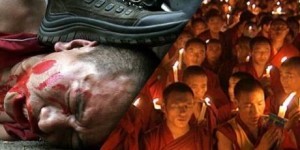 Tibetans who refuse to fly the Chinese flag above their homes risk being beaten or shot in the latest attempt to break their spirits. But now is the best moment in ages to bring hope to Tibet’s proud, but desperate people.

China’s leaders are mounting an intense campaign to draw a veil over their rights abuses and persuade governments to vote them onto the UN Human Rights Council. So if enough of us shine a light on what’s going on in Tibet — squashing an ancient religion, banning journalists, dawn arrests –we can get China to back away from its hard-line policy to be sure of getting the 97 votes it needs.

Let’s show the Tibetan people that the world hasn’t forgotten them. China is feeling the heat as 13 governments just called them out on human rights in Tibet. Sign to stand with Tibet, and then share this with everyone. When one million have signed we’ll deliver it to crucial UN delegations, and make it massive in the media.

Message to UN by the Avazz Petition – “”“”As citizens concerned about the sustained and systematic repression inflicted on Tibetans, we call on you to ask China for specific and monitorable commitments as it seeks votes to return to the UN Human Rights Council. These should include: freedom of expression, religion, association and assembly as well as full investigations into disappearances and access for UN investigators. Let’s help China become a human rights leader fit to sit on the Council””