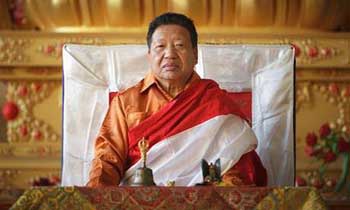 The shimmering golden roof and prayer flags of Kagyu Samye Ling monastery and Tibetan centre are a seemingly incongruous sight in rural Dumfriesshire. Samye Ling’s quiet but widely respected co-founder Chöje Akong Tulku Rinpoche has died in Chengdu, western China, aged 73, after being stabbed. As the head of a large network of Buddhist centres and social projects, Akong Rinpoche was one of the most significant figures in establishing Tibetan Buddhism outside his native country and a prominent figure in his original homeland.

His journey to the west began after the failed Tibetan revolt against Chinese occupation in 1959. Akong Rinpoche embarked, with 300 others, on a perilous journey to India. Many were captured, while others succumbed to exhaustion, starvation or Chinese bullets, and just 13 members of the original party struggled across the border 10 months after they had set off. For all the devastation visited on Tibet itself, the departure of Akong Rinpoche and other leading Tibetan Buddhists was an important beginning.

They brought with them vast experience of a highly developed religious tradition and the memory of a society devoted to supporting it. Once he was settled in the west, Akong Rinpoche devoted himself to re-establishing both Buddhist practice and its social expression in his new environment, as well as trying to salvage what remained in Tibet itself. 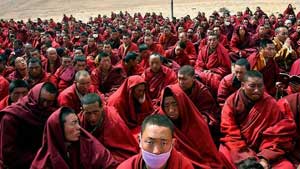 Akong Rinpoche’s first years outside Tibet were difficult. After internment in a refugee camp in India, he joined forces with other exiled Tibetans and in 1963 he sailed to Britain with two of them, Chime Rinpoche and Chögyam Trungpa Rinpoche, who had a bursary to study at Oxford University. Akong Rinpoche worked as a hospital orderly for several years to support all three of them and he never forgot the hardship he experienced in these years.

Interest in Tibetan Buddhism was growing, especially in the counterculture of the era, and in 1967 Akong Rinpoche and Trungpa Rinpoche took over a retreat centre in the Scottish borders, which they renamed Samye Ling. While Trungpa was flamboyant, intellectually brilliant and willing to flout convention, Akong Rinpoche was steady, down to earth and more cautious about innovations in Buddhist teaching and practice. Matters came to a head when Trungpa Rinpoche married unexpectedly. Soon afterwards, he left for the US where he established his own Buddhist movement, then called Vajradhatu.

Akong Rinpoche stayed at Samye Ling and steadily developed it over several decades. A solidly built man with a stable, kindly presence, he was initially more at home with practical work than teaching. In the early days, one resident recalls, he would repair bed sheets and blankets with a hand-operated sewing machine, clear blocked drains and make sure nothing was wasted.

In the 1970s Akong Rinpoche invited many prominent lamas, now in exile, to teach at Samye Ling, including the Gyalwa Karmapa, head of the Kagyu school. Students were inspired to undertake serious practice of the Kagyu system of meditation and study; some became monks or nuns and in 1984 a group commenced the traditional four-year retreat. Akong Rinpoche threw himself into the construction of the spectacular temple, mixing mortar and laying bricks, and when it opened in 1988 the building was a vivid sign that Tibetan Buddhism had arrived in Britain.

The same combination of practicality and commitment to revivifying what he had known in Tibet led Akong Rinpoche to initiate many projects in the following years. He placed these in three categories. First were spiritual activities focused on Samye Ling and a network of more than 30 Kagyu Samye Dzong Buddhist centres and groups worldwide. Second there was humanitarian work, mainly channelled through the charity ROKPA, which funds education, health and environmental projects in the Tibetan areas of China. Third, he was interested in healing and Tibetan medicine, writing books on the subject and initiating a range of psychotherapy and mindfulness projects that combine western and Buddhist approaches. Several projects also focused on preserving Tibetan culture and learning.

Born in the Chamdo area of Kham, Tibet, Akong Rinpoche was recognised as the Tulku, or “rebirth”, of the previous Akong, abbot of a monastery of the Kagyu school in the Kham mountains when he was a small child. Taken from his family at the age of four, he received a traditional religious education at the monastery and specialised in Tibetan medicine before taking up his role as abbot and teacher.

Akong Rinpoche was not a monk in later life, and he married and had four children. In recent times he spent several months each year supervising ROKPA projects in Tibet, the country he had once fled. His collaborative relationship with the Chinese authorities led to criticism, but a non-political stance was an essential precondition for any philanthropic work there.

He was about to start one of these tours when three men, who were reportedly trying to force money from him, stabbed him, along with his nephew and attendant, in his house. He is survived by his wife and children and his brother Lama Yeshe, who is now the abbot of Samye Ling.