Why Christians Might Have Something to Learn From the Dalai Lama 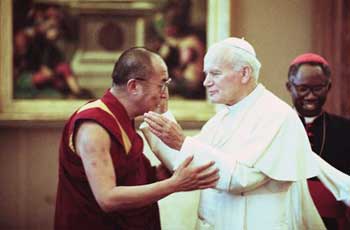 “I suppose he might say that, first, he was writing to protect the faithful from harmful teaching. Eastern religions have enjoyed increasing popularity in the West over the past couple of generations. Perhaps Rev. Russell meant only to set a hedge around orthodox belief, signaling to Christians what he takes to be the clear boundaries of acceptable belief. “Be careful little feet where you go…”

The Dalai Lama came to town recently. True to form, he captivated the city. Everyone loved this gentle, unassuming man whose purpose in life centers on being a presence in the world for mindfulness, for peace and justice. Well, almost everyone …

One local retired megachurch pastor, Rev. Bob Russell, wasn’t that impressed. In fact, he wrote a piece on his website, the purpose of which seems to be to explain what Buddhism is and why from a Christian perspective it gets everything wrong. The Dalai Lama comes under fire as a false prophet, one who presents himself as a sheep, but inwardly is a ferocious wolf.

Apart from the fact that Rev. Russell appears to know very little about Buddhism, save what he reads on wingnut apologetics web sites — the one he cites as offering a more complete analysis of the relative merits of Christianity over Buddhism wonders whether we know that “the chief spiritual advisor for the Nobel Peace Prize winning Dalai Lama is a possessed monk?” — the purpose of his post makes me cringe.

As I read his thoughts on the misguided Dalai Lama I wondered, “Who is this for? Who is he trying to convince that the Dalai Lama presents a threat?” 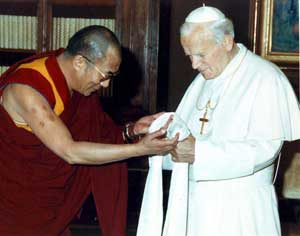 I suppose he might say that, first, he was writing to protect the faithful from harmful teaching. Eastern religions have enjoyed increasing popularity in the West over the past couple of generations. Perhaps Rev. Russell meant only to set a hedge around orthodox belief, signaling to Christians what he takes to be the clear boundaries of acceptable belief. “Be careful little feet where you go…”

Warning the faithful about potential theological potholes is a time-honored tradition in Christianity. I do it myself. And while it can be overbearing if done too much, done with care it provides necessary correctives to facile credulity.

The problem with brandishing the lasso of orthodoxy while riding herd over the faithful, however, is that it can become an end in itself, a way to measure success. If everybody moves in the same direction at the same time, you win.

It’s possible to get everybody moving in the same direction, but wind up moving simultaneously toward the wrong destination. Dispatching all those people you don’t recognize by treating them as “enemies of the faith” seems to me to be heading in the wrong direction.

When approached by John, for instance, who is complaining that the disciples have tried to stop a stranger from doing good in Jesus’ name, Jesus responds by saying, “Do not stop him; for whoever is not against you is for you” (Luke 9:50).

In other words, with all the children starving in the world, with the number of people dying from lack of adequate access to drinkable water and adequate healthcare, with the way the powerful continue to devour the powerless, don’t you have more important things to worry about than playing Sherlock Holmes on God’s behalf?

The other purpose for writing about the dangers of the Dalai Lama, presumably, is to try to convince those who aren’t yet a part of the herd to sign up:

“You don’t realize it, but you’re about to head over a particularly treacherous Tibetan cliff. We can describe in great detail the terror that awaits you at the bottom after you fall. So, join our herd and avoid certain death! (Bonus: We have Christian Aerobics!)”

Apologetics, the martial art of the Christian faith employed against all perceived threats, is a lousy idea. On a practical level it doesn’t work. People aren’t argued into belief anymore than lovers are argued into romance. (Even if I could put together a really cool PowerPoint presentation, complete with bullet points, demonstrating why I’m the man of your dreams, would that overwhelm your misplaced defenses and get you to love me, like, you know, you should already anyway?)

But more importantly, on a theological level it doesn’t work either, since it’s predicated on the assumption that the most important job I have is being right. The post-Enlightenment fallacy of much of Western Christianity is that the holy grail of religious devotion is to be right about Jesus, whether or not that “rightness” ever translates into actually living like Jesus.

In other words, your responsibility as a follower of Jesus isn’t just to believe the right stuff, but to live rightly–which, in the case of Jesus means, pursuing the love and justice made possible by the reign of God.

So, when I read Rev. Russell’s blog post on the Dalai Lama, I thought, “How exactly are the faithful challenged to live more like Jesus by attempts to evince feelings of moral superiority to the Dalai Lama?”

Here’s the thing: Jesus didn’t die so that we could win bar bets with other religions about who understands God best, but so that his followers might learn to let go of the mistaken belief that being the best is something God values.

Jesus didn’t die so we could be the best, but so that we might know what it looks like to give our lives away. And were we to listen, the Dalai Lama might just be able to teach us something about that.

The purpose of nirvana, for example, I would argue isn’t “personal happiness,” since in many ways the realization of nirvana is about detachment from the personal — personal at least in ways that people in the West tend to think about it, namely, as individual fulfillment. Russell doesn’t get everything wrong, just enough to show that he hasn’t engaged Buddhism seriously, apart from cribbing the high points from sources dedicated to proving how evil Buddhism is. ↩

OK. So, herding cattle isn’t the best metaphor. But you see what I mean. ↩

Look, I understand that the false humility in treating everything as tentative and unsettled (e.g., “I have my opinion and you have your opinion”) gets us nowhere. There are some things that even in a postmodern world we can say are more likely to be right than others. ↩

Previous articleHow to Use Technology from a Buddhist Perspective
Next articleGet to know Buddhism!
Digital Media