Coke reveals its secret: It may need to carry a cancer warning

Nightmares about the backlash they suffered the last time they dared to change the secret recipe for their drink still most likely haunt Coca-Cola executives. 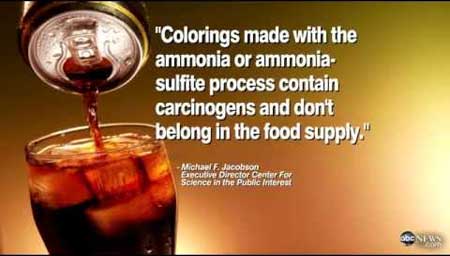 But 27 years after the ill-fated launch of New Coke, the threat of having a cancer warning placed on their famous red bottles is forcing them to revise the closely guarded ingredients again.

With its arch rival Pepsi, Coca-Cola is altering its drink in the US after the state of California declared one of its flavourings a carcinogen – though it will continue to sell the old form of the drink in Britain and the rest of Europe, with no cautionary labelling.

The two drinks have been made to include less of the chemical 4-methylimidazole, a caramel flavouring known as 4-MEI, which the National Institute of Environmental Health Sciences in the US has linked it to cancer in mice and leukaemia in rats. It can be formed during the process of cooking certain ingredients and consequently may be found in minor amounts in many foods. Under Californian law, drinks containing a certain level of carcinogens must have a cancer-warning label on their packaging.

But the two companies – which, combined, make up 90 per cent of the soft-drink market in the US – insist the ingredient is not a health risk.

Coca-Cola said yesterday the cancer warning is: “scientifically unfounded”, while also maintaining that the company has been able to make the changes through a “manufacturing process modification” rather than a full change of formula.

“The caramel colour in all of our products has been, is and always will be safe,” a spokesperson said.

“The changes will not affect the colour or taste of Coca-Cola. Over the years, we have updated our manufacturing processes from time to time, but never altered our secret formula. Caramel is a perfectly safe ingredient and this has been recognised by all European food-safety authorities.

“The European Food Safety Authority (EFSA) reaffirmed the safety of caramel colouring as recently as March 2011 and stated that the presence of 4-MEI in caramel colouring is not a health concern. In fact, 4-MEI is found in many foods including baked goods, coffee, bread, molasses, soy sauce, gravies and some beers.”

The American Beverage Association, the drinks industry’s trade body in the US, also said that there is no evidence that the ingredient poses a risk to humans. And the US Food and Drug Administration said someone would have to drink 1,000 cans of Pepsi or Coke per day to ingest the same dosage of the chemical given to the laboratory mice.

Is a great deal of self-propagated myth surrounding the Coca-Cola recipe and its “Merchandise 7X” combination of flavourings, which is apparently privy to just two executives who are not allowed to fly in the same plane in case the secret goes down with them. Last year an American radio presenter tracked down a 1979 article in an Atlanta newspaper which revealed nutmeg, neroli and even coriander were ingredients.

The original recipe from 1886 has been changed several times. Cocaine was replaced by caffeine in 1904. But the most controversial change was in 1985, when the company introduced New Coke with a sweeter taste. The product bombed, lasting just three months before the original was reinstated.

Previous articleCat Saves Owner, 10 Others from the House Fire in Midnight
Next article9 Things You Probably Didn’t Know About Dreaming
Digital Media